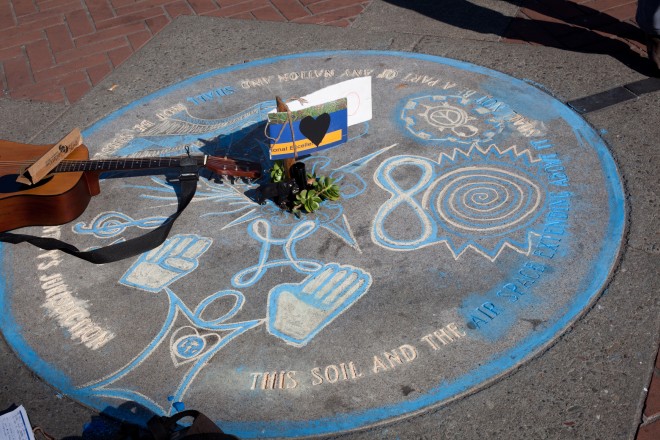 The monument to the Berkeley Free Speech Movement, decorated by Occupy Cal supporters after their eviction.

The Occupy movement took a turn for the symbolic in Berkeley this week, harkening back to a heritage of protest, social unrest, and progressive causes.

And, according to one former member of the Free Speech Movement, which began in the same spot, the implications of the Occupy movement could reverberate for a generation — even if the protesters only force small institutional changes.

On Wednesday students and residents of the Bay Area gathered to occupy the space outside Sproul Hall on the UC Berkeley Campus, the birthplace of the Free Speech Movement in 1964. The Free Speech Movement, after a tumultuous year, ended restrictions on student speech not only at Cal, but universities all over the nation.

It’s been 47 years since the start of the Free Speech Movement, which inspired the anti-Vietnam War movement, the hippies, and perhaps even the internet as we know it.

“It’s an old story to us,” said Felsenstein, speaking for the board of the the Free Speech Movement Archives.

“The fundamental thing that was going on with the Free Speech Movement was reclaiming public space, and I have seen this expressed recently with the Occupy movement,” Felsenstein said.

During 1964, engineering students like him all over the country were not only watching Cal, but working on ways to connect the campuses together using the first nascent and slow computer network.

There is no unified vision of what Occupy wants, besides a general feeling that the system is rigged in favor of the privileged, though for Occupy Cal, there is a special focus on rising tuition, rising student debt, and continually cut-back school services.

It’s a raw deal compared to what their parents got.

On Wednesday, Occupy Cal parked itself on top of the spot where Mario Savio gave his famous speech of the era:

Read 2702 times
Published in News Technologique-Tech News
More in this category: « Dissed by Logitech, Google TV Soldiers On Hydrovolcanism: When Magma and Water Mix »
back to top