iFixit Gets the Skinny on What's Inside the Droid Razr 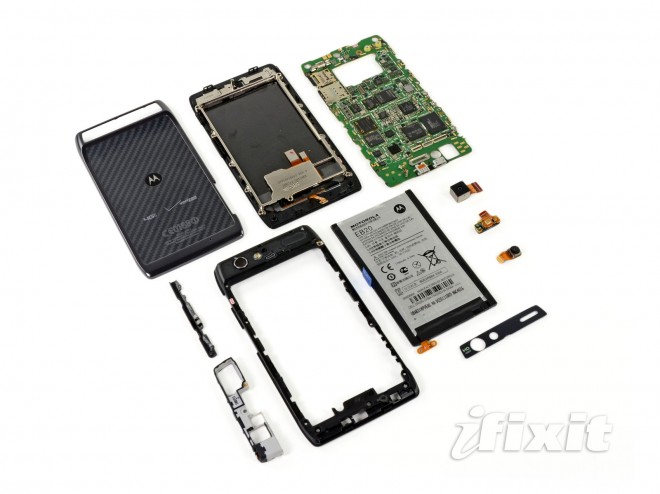 Today, iFixit grabbed its signature spudgels and screwdrivers to pry apart the ultra-thin Motorola Droid Razr. Inside, the phone features some seriously slender components. And they’d have to be — the Razr is the world’s skinniest smartphone.

Unfortunately for home repair gurus, that thinness makes the phone difficult to take apart and repair. In fact, iFixit gave the Droid Razr a 4 out of 10 for repairability.

The phone measures in at a scant 0.28 inches thick for the majority of its profile. And at its thickest point — the oblong, box-shaped area where the 8-megapixel camera is housed — it’s still only 0.42 inches thick (which is just a sketch thinner than the 0.43-inch thick Droid Bionic, which was previously touted as the thinnest LTE phone available). If you break the display, it will be a costly fix. The AMOLED screen is permanently fused to its surface glass, so if you break either you’ll have to replace both. However, you probably won’t have to worry about the other side of the phone. On the rear, the Kevlar-threaded backplate isn’t just strong and durable, it’s also flexible. It is not, however, bulletproof.

Inside the Droid Razr, nearly all of the chips are tacked on one side of the motherboard in order to keep things slender. It’s packed with some 13 separate chips, while the back of the board is bare.

The new Razr’s 1750mAh battery provides 300mAh more capacity than the battery of the iPhone 4S (though it must be noted that this is just total capacity, and a phone’s overall hardware profile, and how an owner uses a phone, really defines battery life). Although getting to the battery is a bit of a chore, it is replaceable, and even has a “remove battery” tab in case you do need to eventually replace it. Physically, the battery is large (3.79 x 2.25 inches) and super thin (0.11 inches).

And how’s this for diagnostic hardware: The DroidRazr includes two liquid damage indicators, so there’s no fooling Motorola or Verizon if you accidentally drop it in the toilet, and try to claim the phone inexplicably “just quit working.” In fact, one of the sensors is so close to the edge of the phone that iFixit recommends “not sweating while holding this phone.”

We’ll interpret that observation as a joke.

The iFixit team says they were afraid all the plastic frames and casings would “break at any moment” as they were taking them apart, so if you do decide to disassemble your Droid Razr, make sure you’re very careful.

For more details, and a step-by-step guide of how to tear the Motorola Droid Razr apart, head over to iFixit.