Alt Text: Lose Your Way to Victory With the Futility Party 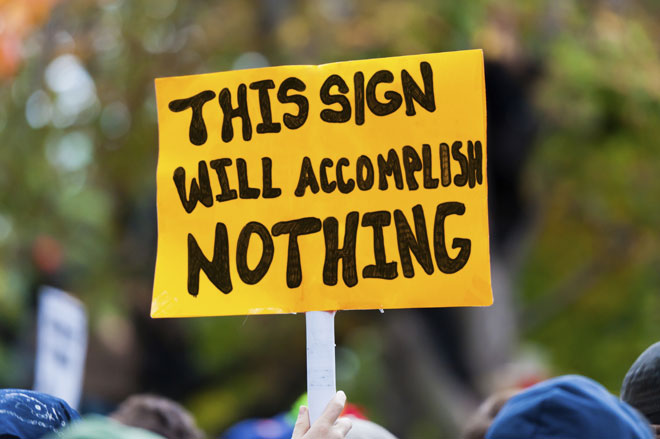 The genius of the Occupy movement sparks an even more brilliant idea: the Futility Party.Image: Lore Sjöberg

I don’t talk about politics much, but it’s not because I’m apolitical. To the contrary, my political ideals are so firmly and deeply held that there’s no chance of them being realized in my lifetime. So I keep my opinions mostly to myself; the last thing the web needs is another grimacing keyboard-beater insisting that if he were God-Emperor, everything would be rosebuds and foot massages.

I find radical politics embarrassing, even my own, but I find mainstream politics baffling and disturbing. I understand the need for actual electable candidates that can beat other electable candidates who are marginally worse, but in my mind, realpolitik is a tiresome necessity, like defecation or classic rock. I’m profoundly troubled that so many people are so damn enthusiastic about it.

But politics is worse than sports. Politics is like going to a game at your local sporting venue, rooting for the home team, then attempting to flee in terror as players and referees alike fire bowling balls into the stands. Also there’s barbed wire covering the exits. And the hot dogs are like eight bucks — what the hell?

Anyhow, that’s why when I first heard about the Occupy movement — or lack of movement, I suppose — I wasn’t interested. I’m not much for camping, anyway, and Wall Street is notoriously bad for bird watching. But the more I learned about Those Who Occupy, the more interested I became. When I heard that they were disorganized and had no concrete demands, my ears pricked up. When they were accused of lacking any sort of coherent agenda, my brain started to tick, and not in the way it does when I’m near fluorescent lighting.

I think the Occupants almost have it right. Their main complaints seem to be that politics is influenced by people with political influence, and that powerful people have all the power. In other words, they’re protesting the futility of their own protest. That’s the sort of recursive, discursive incursion I can get behind.

The best thing — the brilliant thing — is that in the end, the Occupy movement will fail to make any lasting changes in politics, thereby proving its own point.

Follow along. If the vaguely defined “1 percent” have all the power, then no amount of sign-waving, slogan-chanting or locale-occupation will have any influence. It’d be like trying to get the Pope to let someone else be infallible once in a while. So if the protests end in any status other than quo, then the 1 percent is a myth, normal people have plenty of influence, and the protestors were just wasting everyone’s time.

However, if the Occupy movement dies without inspiring any substantial changes in the U.S. political scene, then it will prove that they were right all along.

The Occupy movement can only succeed by failing completely.

In other words, the Occupy movement can only succeed by failing completely.

That’s powerful, and I want to be a part of it. I’m tempted to actually, you know, occupy someplace, but I’m thinking more long-term.

I’m officially founding a new political party, the Futility Party. Our main platform will be a commitment, once elected, to ending the corruption and cronyism that keeps us out of office. We will reject any funding that might help us get the word out, avoid coalitions and compromises that will turn us into a viable political entity, and make sure our candidates and backers lack the influence to disrupt even the closest election.

Our slogan will be “Unimpeachable. Unassailable. Unelectable.” Every election day, when the results are announced and we fail to procure a single seat in the House, Senate or Oval Office, we’ll break out the champagne and celebrate the fact that our utter humiliation has once again vindicated our ideals.

Will I be a candidate? Certainly not. I’m an enormous egotist, obsessed with material goods and concerned with my public image. Any perusal of my columns will show that I’m not just a liar, but an inconsistent liar at that, willing to alter my lies to fit any situation.

In other words, I’m far too electable.

Born helpless, naked and unable to care for himself, Lore Sjöberg overcame these obstacles to become a candidate, a candyman and a candelabra.

Read 2363 times
Published in News Technologique-Tech News
More in this category: « U.S. Hiring Mercenary Air Force for Iraq Rescues The Art of Pixar Documents 25 Years of Brilliance »
back to top