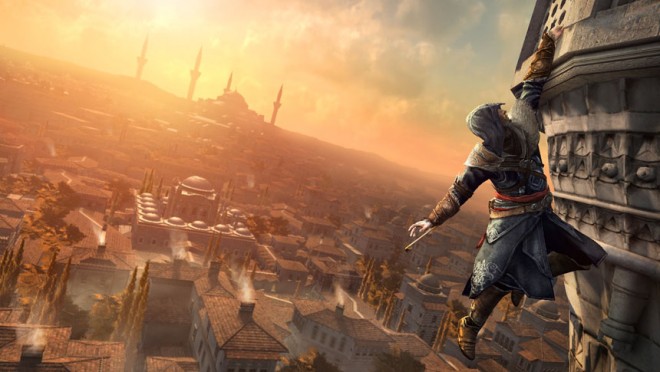 Ezio is still hanging in there in Assassin's Creed Revelations.
Image: Ubisoft

Man, when I get old, I hope I age like Ezio Auditore. At all of 52 years young, he still climbs up buildings and knifes people in the face just like he used to back when he was 17. What’s this assassin’s secret to staying young? Well, his latest adventure Assassin’s Creed: Revelations, available Tuesday for Xbox 360 (reviewed) and PlayStation 3, uses the same game engine as his first outing in 2009. So it’s the exact same Ezio underneath the new grey hair texture. But like the man himself, Assassin’s Creed is growing old — and getting paunchy with age.

Ubisoft has not been shy about announcing its plan for the Assassin’s Creed series: It plans to release a new entry in the open-world action series every year. How do you make a huge videogame like this in just one year’s time, you ask? Revelations answers that question in the first thirty seconds. As you watch the introductory movie, the first things you see on screen are the names of six different development studios, located everywhere from France to Montreal to Singapore.

It’s not entirely coincidental, then, that Revelations feels very much like six distinct games all stitched together.

Sneak through a city and stealthily cut the throats of your political enemies. The formula is still fun, but it’s hard to ignore the fact that I’ve done this same thing for the past three years — and the stakes have gotten lower, not higher. Avenging the deaths of Ezio’s family while slowly uncovering the mysteries of the Assassins and the Templars was intriguing all the way throughout Assassin’s Creed II, but at this point it’s getting harder and harder to get mad at the people I’m supposed to be assassinating. I feel like maybe they should just sit down and talk it out.

Revelations is set in Constantinople, not that you would really notice besides the fact that they swapped out the Colosseum for the Hagia Sophia. All the shops look the same as they did in Rome, the historically accurate magic tunnels that they used to travel from place to place all look the same, etc. Even all the bugs are the same: Oh, I fell through the ocean floor. Oh, the game locked up during a cutscene. Just like old times.

I do like this blend of stealth and parkour and killing, which is why I keep playing these games. They’re like nothing else on the market. The combination of the serene cities and enchanting soundtrack makes these games such fun to just wander around in. I’m into the story. But this series is slowly going to eat itself if it keeps copy-and-pasting all the fundamental elements of the last year’s game.

Certain elements modeled after the Facebook games that your mom plays were added in to last year’s game Assassin’s Creed: Brotherhood, and they are back with a vengeance this time around. You can still renovate shops and landmarks around the city by buying them, which will increase the income you receive, which you can then spend on… buying more buildings, of course! You can also recruit more assassins into your guild, who you can then send on missions by way of a text-based menu. The game will tell you when those missions are over, and then you can… send your assassins on harder missions!

The silver lining is that almost all of this is totally skippable. I just got enough cash to buy new armor, then sailed straight through the main game without ever needing to worry about all the cowclicking busywork. Ditto the “bomb crafting” feature (never used ‘em). And after playing a few rounds of the “Den Defense” mini-game I realized it was more convenient to just let the Templars capture my dens in the first place, then go back and reclaim them. 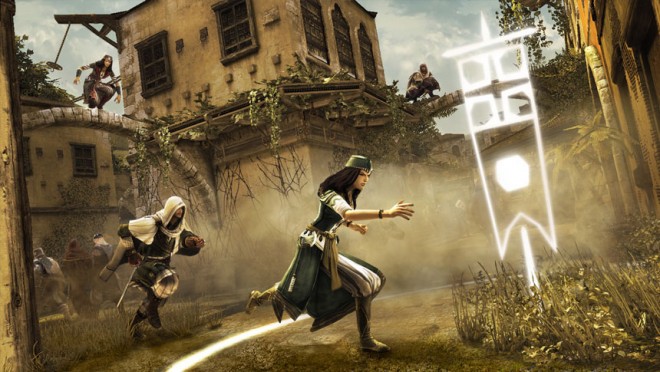 Yes, of course they played Capture the Flag in Renaissance Italy.
Image: Ubisoft

Ezio is in Istanbul to reclaim the keys to the library of Altaïr, hero of the first Assassin’s Creed game. Retrieval of these keys is generally centered around a linear action sequence that’s significantly more dramatic than the open-world gameplay. Explosions! Bridges that crumble under your feet! These do well to break up the action, but they’re so clearly separated from the rest of the game that it’s a little jarring.

Speaking of which, in Revelations you get to play as that guy again. But not for very long. There are a handful of brief 10-minute segments where you go back in time and relive Altaïr’s memories of turn-of-the-century Jerusalem, finding out what happened to him after the events of the first game. I was looking forward to seeing how these segments played out, but unfortunately they’re barely above the level of interactive cut scenes — you’re not growing Altaïr as a character, just stepping into his shoes for a few minutes at a time.

The unique conceit of the Assassin’s Creed series is that the real main character is a guy living in modern-day Manhattan who’s been put into a machine that lets him relive the memories of his assassin ancestors.

Of all of the distinct slices of gameplay that make up Revelations, Desmond Miles’ are the absolute strangest: They’re first-person puzzle games, approximating something like a simpler version of Portal. You have to navigate a series of rooms with platforms that you can place in front of yourself. As you work through these rooms, Desmond (currently in a comatose state, stuck inside the ancestor-reading machine) relives his past and we find out more about him through a first-person narration. These are fun segments, not only because they introduce a novel gameplay mechanic but because they advance the meta-narrative. As the full game wraps up, we do get some of the storyline revelations promised in the game’s title, although the ending is another cliffhanger tease that does little but set up the next game.

If you’re tired of being the assassin and would rather be assassinated, you can play Revelations’s multiplayer mode, an expanded version of the game introduced last year. There are many more play modes that aren’t just about killing each other, like a Capture the Chest game which simply involves hiding near a treasure chest without being spotted long enough to grab it. Of course, you’ve got to put a lot of time into multiplayer if you want to be competitive, because you get superpowers as you level up, and you’ll be at a disadvantage otherwise.

It’s certainly an original spin on multiplayer gaming, although for me there’s always going to be something of a disconnect at play — the single-player game is fun because I get to be the awesomest, smartest killer in the world, but as soon as I go online, I’m a clumsy dead idiot.

See You Next Year

I would end this review, as I did last year, with an exhortation to Ubisoft to take a break and come up with an Assassin’s Creed game that feels new, rather than a sequel produced at breakneck speed and using as much of the previous games as possible. But the publisher has already announced that the next game in the series will be arriving in 12 months’ time.

The elements added to Assassin’s Creed: Revelations do make it feel like a more different and occasionally surprising experience compared to Brotherhood, which felt like an expansion pack. But at its core, we’re still playing the same game for the third time.

Read 3097 times
Published in News Technologique-Tech News
More in this category: « Army Wants an Honest-to-God B.S. Detector AMD Sends 'Bulldozers' Into War of the Server Chips »
back to top