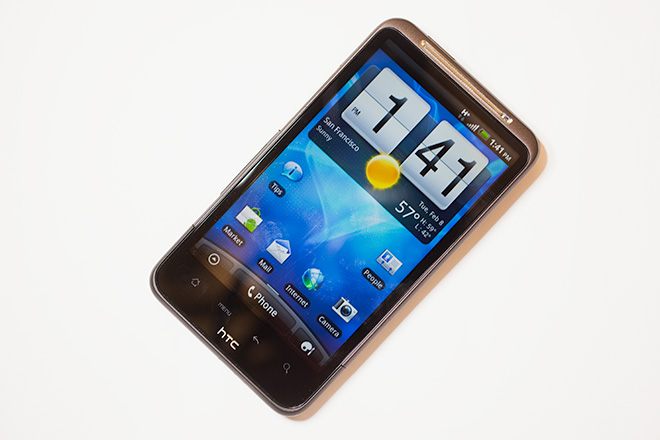 The HTC Inspire offers 4G and a 4.3-inch screen for a fraction of the price of other smartphones. Photo: Jim Merithew/Wired

Smartphones used to be reserved for those wealthy enough to fork over hundreds of dollars for a handset — and over a grand each year to actually use said handset over a data connection. But the times, they are a-changin’.

Although the iPhone dominated smartphone sales last quarter — with the iPhone 4 and 3GS taking the number one and two spots, respectively — a new trend is taking shape: super-cheap smartphones for the masses.

The average price of smartphones has dropped for four consecutive quarters, down to its current price level of $135. The NPD Group found that for those who intended to buy a smartphone in the $200 to $250 range last quarter, 64 percent ended up getting a sub-$200 handset instead.

A combination of wider budget-friendly offerings and price-reduced older models are key to this trend. And with consumers clutching their pocketbooks ever tighter, it’s a welcome turn of events for those hoping to dive into the smartphone scene. Indeed, 59 percent of mobile phone purchases last quarter were smartphones (up from 46 percent of all mobile phone sales during the same quarter in 2010).

“We’re seeing that middle tier of advanced feature phones disappearing,” NPD’s executive director of industry analysis Ross Rubin says. Consumer priorities are changing, particularly for those enlisted in the dumbphone ranks. “Mobile connectivity is becoming so important that they’re making an investment on a better handset with a higher monthly fee,” Rubin says.

And just because these new handsets are labeled as “budget” doesn’t mean they’re completely lacking in the comforts of other smartphones. Models typically bear single-core processors, yes, and also have a smaller screen, but the displays aren’t impossibly small. They’re often 3.2 to 3.7 inches, which is within the iPhone realm of 3.5-inches, though much smaller than 4.3- or 4.5-inch plus Android stunners on the market.

That said, the new entry-level smartphones often include cheaper parts, which can make it more difficult for software upgrades. Other than those caveats, the new smartphones have most of what you need: a capacitive-touch display, a major mobile OS like Android, 4G capability, and even high-end features like 8-megapixel cameras.

AT&T in particular has had a lot of success with budget smartphones, like the dirt-cheap $30 Huawei Impulse 4G and $100 HTC Inspire, Rubin says. And even the iPhone is entering this new mid-range space: Although the iPhone 3GS has been available for cheap since the iPhone 4’s debut, Apple has stepped up its offerings in the budget department by now offering the iPhone 4 at a lowered price — and the iPhone 3GS for free.

Although a phone’s price can be a big hurdle, monthly data fees are really the offenders that continually take bites out of bank accounts. In fact, carriers are keenly aware that less-pricy data plans are important in converting feature phone users to smartphone users, and are wisely making concessions.

“Carriers seem committed to adjusting their pricing to get an even greater number of people using their wireless data,” Rubin says.

Does that mean premium smartphone purchases are on the outs? Absolutely not. Apple has sold record numbers of its shiny new iPhone 4S, and the HTC EVO 3D and Motorola Droid 3 were the third and fourth most popular smartphones sold last quarter.

“In general, the handset market overall is saturated. Gains are coming from people switching smartphones or trading up from feature phones,” Rubin says.

For now, the bigger gain for carriers and handset-makers alike are through first-time smartphone buyers, and we’ll likely see more price-friendly options cropping up alongside premium models over the coming months.