A parade of big-eyed, swollen-headed, hallucinating freaks have been marching through La Luz De Jesus Gallery for 25 years — and no, we’re not talking about the artists.

That description fits the surrealistic masterpieces, inspired by underground comics, carnival sideshows, punk rock and fairy tales, that have earned art dealer Billy Shire his reputation as the king of lowbrow art. 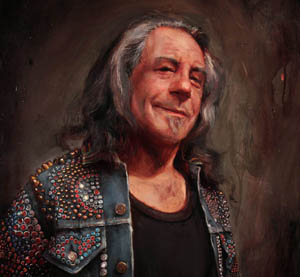 “This is populist art,” La Luz owner Shire told Wired.com. “You don’t have to be some discerning collector where you look at an installation and then you have to read the plaque to find out what you’re looking at.”

When Day of the Dead obsessive Shire opened his alternative Los Angeles gallery back in 1986, concept art and video installations ruled the roost in the art world. Artists who actually knew how to draw were snubbed by museums, galleries and collectors, says Zap Comix legend Robert Williams, who landed an early La Luz slot shortly after his Zombie Mystery Paintings became an underground sensation.

“Billy gave shows for me and lot of very talented people that the real art world wouldn’t pay any attention to,” Williams said in a phone interview.

To celebrate the quarter-century mark of showcasing vivid art that tells a story, Shire has assembled a 25th-anniversary group show that runs through Nov. 27 at his gallery. And in December, Last Gasp will publish a companion art book called La Luz de Jesus 25: The Little Gallery That Could.

Browse through the bold and beautiful low-brow artworks in the gallery above. Some images not safe for work.