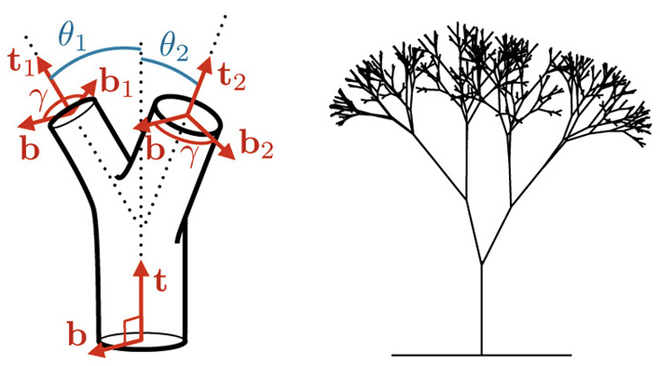 The graceful taper of a tree trunk into branches, boughs, and twigs is so familiar that few people notice what Leonardo da Vinci observed: A tree almost always grows so that the total thickness of the branches at a particular height is equal to the thickness of the trunk. Until now, no one has been able to explain why trees obey this rule. But a new study may have the answer.

Expressed mathematically, Leonardo’s rule says that if a branch with diameter (D) splits into an arbitrary number (n) of secondary branches of diameters (d1, d2, et cetera), the sum of the secondary branches’ diameters squared equals the square of the original branch’s diameter. Or, in formula terms: D2 = ?di2, where i = 1, 2, … n. For real trees, the exponent in the equation that describes Leonardo’s hypothesis is not always equal to 2 but rather varies between 1.8 and 2.3 depending on the geometry of the specific species of tree. But the general equation is still pretty close and holds for almost all trees.

Botanists have hypothesized that Leonardo’s observation has something to do with how a tree pumps water from its roots to leaves. The idea being that the tree needs the same total vein diameter from top to bottom to properly irrigate the leaves.

But this didn’t sound right to Christophe Eloy, a visiting physicist at the University of California (UC), San Diego, who is also affiliated with University of Provence in France. Eloy, a specialist in fluid mechanics, agreed that the equation had something to do with a tree’s leaves, not in how they took up water, and the force of the wind caught by the leaves as it blew.

Eloy used some insightful mathematics to find the wind-force connection. He modeled a tree as cantilevered beams assembled to form a fractal network. A cantilevered beam is anchored at only one end; a fractal is a shape that can be split into parts, each of which is a smaller, though sometimes not exact, copy of the larger structure. For Eloy’s model, this meant that every time a larger branch split into smaller branches, it split into the same number of branches, at approximately the same angles and orientations. Most natural trees grow in a fairly fractal fashion.

Because the leaves on a tree branch all grow at the same end of the branch, Eloy modeled the force of wind blowing on a tree’s leaves as a force pressing on the unanchored end of a cantilevered beam. When he plugged that wind-force equation into his model and assumed that the probability of a branch breaking due to wind stress is constant, he came up with Leonardo’s rule. He then tested it with a numerical computer simulation that comes at the problem from a different direction, calculating forces on branches and then using those forces to figure out how thick the branches must be to resist breakage (see illustration). The numerical simulation accurately predicts the branch diameters and the 1.8-to-2.3 range of Leonardo’s exponent, Eloy reveals in a paper soon to be published in Physical Review Letters.

“Trees are very diverse organisms, and Christophe seems to have arrived at a simple and elegant physical principle that explains how branches taper in size as you go from the trunk, through the boughs, up to the twigs,” says Marcus Roper, a mathematician at UC Berkeley. “It’s surprising and wonderful that no one thought of [the wind explanation] sooner.”

“This study brings trees up to par with manmade structures that have been primarily designed taking into account wind-loading considerations, the Eiffel Tower being perhaps the most well-known example,” says Pedro Reis, an engineer at the Massachusetts Institute of Technology in Cambridge. The results of this research could “impact our understanding of wind-based damage, such as the destruction by the recent Hurricane Irene,” he says, which toppled trees across a large swath of the northeastern United States in September.

Image: The image on the left shows the variables Eloy’s numerical model used to calculate trees to test his wind-force hypothesis. The image on the right shows a skeleton of a tree before the simulation calculates diameters of the branches (C. Eloy et al./Phys. Rev. Letters)