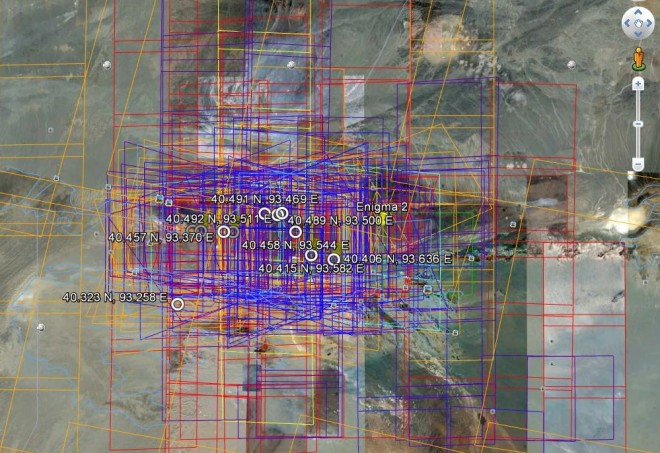 The internet lost its collective mind earlier this week, when a Reddit user stumbled across “what appears to be a monumental military/science experiment going on in a Chinese desert, visible on Google Earth.” But the strange and massive box of jagged lines wasn’t the only odd structure carved into the ground — and this week’s swarm of Google-spotters weren’t the first ones to take an interest in the region.

As former CIA analyst Allen Thomson notes, turning on the DigitalGlobe coverage layer in Google Earth shows all the various times the imaging satellite has been asked to inspect that part of the desert. (Here’s a screenshot, above.) “Starting in 2004, somebody has ordered many, many satellite pictures of it,” Thomson tells Danger Room. “Can’t have been cheap.”

Below are some of the strange things those satellite swoops photographed, which were then uncovered by Danger Room’s community of commenters.

Read 2476 times
Published in News Technologique-Tech News
More in this category: « A Google-a-Day Puzzle for Nov. 15 Buying Guide: Multimedia Speakers »
back to top