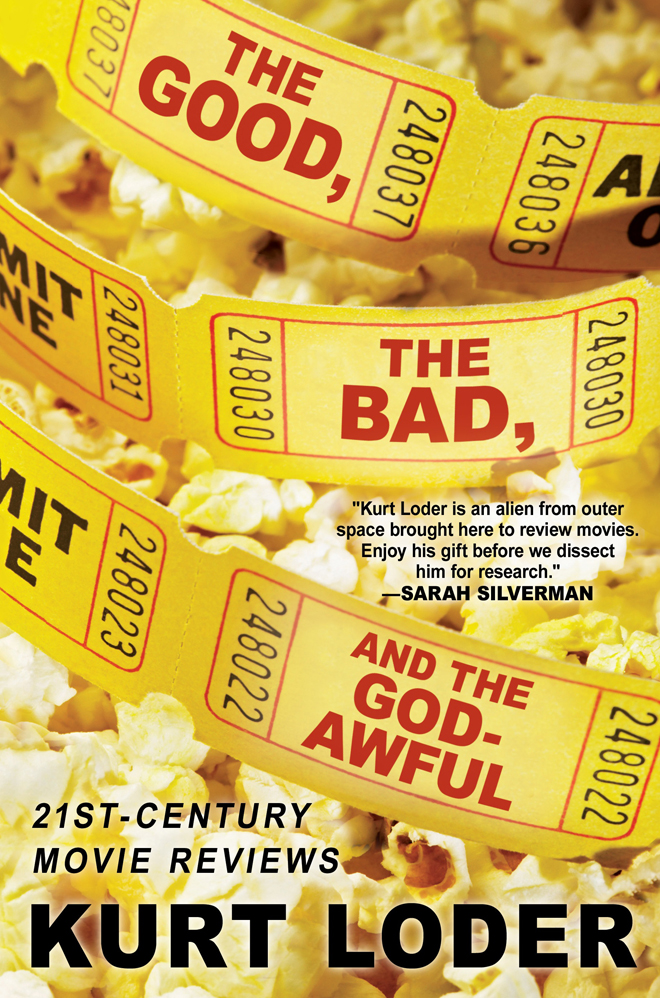 If you ask him, Loder prefers the term “movie reviewer.” He says as much in the introduction to his new book, The Good, The Bad and The God-Awful: 21st-Century Movie Reviews, a collection of his film writing since 2004. The unassuming scribe writes that a true film critic is someone like Pauline Kael, a scholar of the art form who wrote for The New Yorker.

Loder’s own pop culture interests are wider than just cinema, but he’s deeply into film.

“I think most of us, whatever our day jobs, have a full-time interest in movies,” Loder says. “Has there ever been a period when more people knew about nuts-and-bolts film-biz ephemera like budgets, release schedules and opening-weekend grosses?”

Many of the reviews in The Good, The Bad and The God-Awful have been available online (they were originally written for MTV and Reason magazine), but Loder wanted to gather his work in one place. The book is divided thematically, with sections like “Creepers” (for scary horror and scary-stupid attempts at horror) and “The Land That Laughs Forgot” (for comedies best avoided). The book also has an actor-centric portion devoted entirely to Nic Cage.

“The man is a genre unto himself,” Loder insists. “Such a fine actor, and yet … Bangkok Dangerous? Ghost Rider!? I know he’s had IRS problems, but his project choices are still baffling: Season of the Witch is a movie that has ‘January release’ written all over it. On the other hand, it has to be said that Cage never just phones in a performance — he’s always entirely present and giving it his full attention. Unfortunately, in many cases this only adds an element of queasy humor. I’ll definitely be there for Ghost Rider: Spirit of Vengeance … Can’t muster the same certainty about National Treasure 3, though.”

Loder’s reviews are all short and easy to read. He stayed away from altering any of his original ideas, so some of his reviews couldn’t make the cut (he admits he wrote a rave review for Watchmen simply out of excitement for the comic book finally being brought to the big screen). Still, the book contains its fair share of surprises — praise for Lemony Snicket’s A Series of Unfortunate Events and even a defense of Jennifer’s Body.

“I liked Jennifer’s Body and thought Diablo Cody’s script was clever and funny,” Loder says. “But the movie suffered from being difficult to pigeonhole. And of course Megan Fox — who was rousingly sleazy — rubs a lot of people the wrong way.”

Loder is supposed to start work on his next book project soon (details TBA) but will continue with his reviews in the meantime. On his radar? David Fincher’s remake of The Girl With the Dragon Tattoo and “whatever Brad Bird has managed to do with the latest Mission: Impossible.”

Given Loder’s credentials as a pop-culture scholar, it was a pleasant surprise to see him as an early supporter (via Twitter) of Wired’s Relic Wranglers, a community intent on uncovering lost media artifacts. Loder notes that artworks lost to history or sealed away in vaults have a special mystique in the internet age, when so much media is just a click away.

“Nowadays, a work of art, or attempted art, can only be lost if its creator decides to burn it before showing it to anyone,” he says. “Once it enters the digital sphere, it’s here to stay, opening up the painful prospect of eternal embarrassment.”

In keeping with his recent book, Loder’s personal lost items of interest fall within the film industry. At the top of his list: Orson Welles’ second feature film and a biopic about twisted game show host Chuck Barris.

“Who wouldn’t want to see an unmutilated version of The Magnificent Ambersons?” Loder says. “And I personally wonder what sort of movie George Clooney’s Confessions of a Dangerous Mind — a great and grievously underrated film — might have been if he’d shot the original script that Charlie Kaufman wrote for it. I had a chance to ask Sam Rockwell about that, and he said the original screenplay was very dark and strange, and had ‘a lot of abortions.’ Is your interest piqued, or what?”

Loder is quick to remind us that not all lost pop culture relics are created equally. Some might be better off locked away in vaults.

“People salivated for years over the unreleased tapes of Jimi Hendrix jamming with John McLaughlin,” he says. “Then you finally hear some of them, years later, and you understand why McLaughlin didn’t want them released.”