Vet to Feds: Enough Stonewalling, Give Us Pot for PTSD 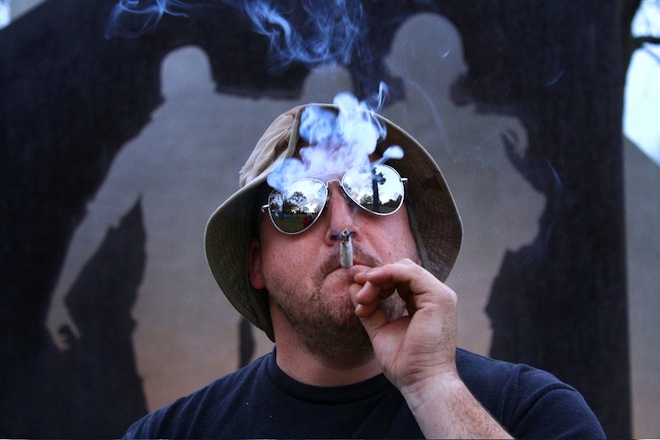 During his second deployment to Iraq in 2004, Sgt. Begin was evacuated to Maryland’s Bethesda Naval Hospital after enduring an IED attack that left him with a stump for a right arm. The years that followed were a haze of prescription drugs, arrests, overdoses and stints in several mental institutions.

“My life went downhill from the moment I came back from Iraq,” Begin, now a 31-year-old veteran, tells Danger Room. “Doctors at Bethesda had me on so much, and on such high doses of everything, that I didn’t even know what was a symptom and what was a side effect.”

At one point, Begin, diagnosed with PTSD shortly after coming home, was taking more than 100 pills a day. So many that he would stuff dozens of bottles into a backpack to lug everywhere he went. Now, he’s cut his dependency on prescriptions to zero. Their replacement? Five joints a day.

“Using marijuana balances me out,” he says. “It takes those peaks and valleys of PTSD and it softens them. It makes my life manageable.”

Begin’s now launched an online petition asking the feds to change their course on marijuana as a treatment for PTSD. In September, the first-ever study proposed to evaluate marijuana as a potential treatment for PTSD was blocked by officials at the National Institutes on Drug Abuse (NIDA). With an estimated 37 percent of this generation’s vets afflicted with PTSD, and a dearth of effective treatment options available, Begin thinks pot deserves, at the very least, a single study. 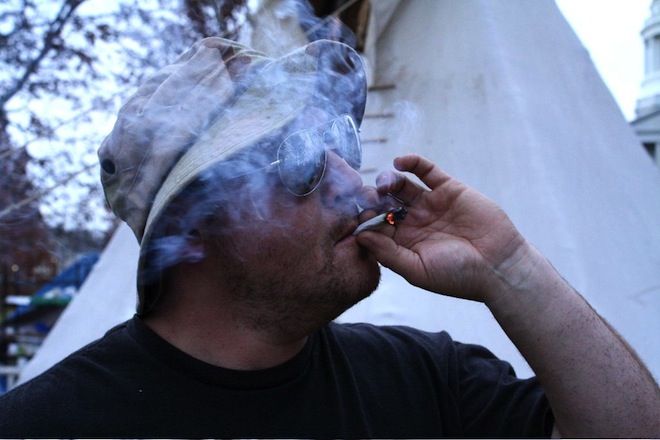 Over 12,000 people in 40 states have signed his petition so far, most of them in the past three days. And Begin has been inundated with e-mails from vets who are both supportive and curious. “If I come out and admit ‘this works for me,’ they want to know whether it’ll work for them,” he says. “That’s why we need research.”

Dr. Sue Sisley, an assistant professor of psychiatry at the University of Arizona College of Medicine, agrees. She’s the researcher behind the proposed study, which would evaluate the impact of various strains of weed, smoked or vaporized for two-month periods, on 50 veterans who’d been diagnosed with PTSD. For two years, Sisley’s been pulling together documents to get the okay from federal agencies.

Earlier this year, FDA officials finally gave her the green light. But unlike any other illicit drug that’s used in medical studies (MDMA or LSD, for example), marijuana can only be accessed from one place: A massive storehouse operated by NIDA. A panel at that agency in September declined Sisley’s proposal, citing her relative inexperience in treating PTSD patients along with “a host of safety issues” they anticipated from allowing patients to smoke up outside a medical facility.

“At this point, I can’t help but think they simply don’t want to move forward,” she tells Danger Room. “Maybe they figure if they stall long enough, we’ll give up and go away.”

But in Begin’s case, as well as that of thousands of troops and vets, significant safety issues already accompanied legal, VA-vetted prescriptions. During his six-year stint on prescription meds doled out by VA doctors, Begin was largely unemployed and in and out of prison for assault charges and probation violations. In 2009, he took 90 Valium and was hospitalized, and subsequently institutionalized. Months later, he did the same thing with Klonopin, an anti-anxiety medication, and had his stomach pumped — before being sent home with a new prescription for the same drug.

“The son that left for Iraq was not the son that came back,” Anna Begin, Ryan’s mother, tellsDanger Room. “Let me put it as simply as I can: Every single day, my son was suicidal.”

Last March, Begin saw a civilian doctor and was prescribed medical marijuana for chronic pain, largely caused by the upward of 30 surgeries to the arm and elbow that he’d had since 2004. Not only did the weed relieve Begin’s aches, but it soothed the anxiety, insomnia, rage and instability he associated with PTSD. When his VA doctor refused to offer up more prescriptions while Begin was smoking pot (“He said ‘pills or pot, you can’t have both,’” Begin recalls), he made an easy choice.

“I just didn’t want to be shoved full of pills anymore,” he says of his decision, which now sees Begin smoking four or fives joints a day. “I know this works for me.”

Begin even credits marijuana with his renewed vigor for activism: He’s spent the past 30 days camped out at the Occupy Augusta demonstration in Maine, in part to advocate for the legalization of marijuana and the addition of PTSD to the state’s list of qualifying conditions for medical weed. “There’s absolutely no way I’d be out here, surrounded by people, talking all day, without the marijuana,” he says. “I’d be at home, in bed, instead of out trying to help.”

Begin suspects that marijuana would work for other veterans, and it’s an idea that animal studies, human trials with synthetics and myriad anecdotal reports already reinforce. But with nary a human study to bolster the idea, it’s unlikely that PTSD will qualify patients for marijuana anytime soon. Indeed, the California Medical Association recently became the first major medical group to advocate for pot’s legalization, largely because its medicinal efficacy can only be established “once it is legalized and more research is done.”

Even Begin’s mom would rather see her son on pot than prescriptions.

“When I don’t hear from him for a few hours, I don’t have to wonder if he’s killed himself,” Anna says. “Marijuana saved my son’s life.”