If you were a betting man and wanted to play the safe money on picking a volcanic eruption, few volcanoes would be better to pick than Etna in 2011*. The Italian volcano had its 18th eruptive event (“paroxysm” in the words of Dr. Boris Behncke and Osservatorio Etneo) and it was almost a photocopy of many of the previous 17 events that have occurred during the calendar year. We had ash emissions! We had lava spatter and fountaining! We had lava flows! It was classic Etna – an energetic yet brief show of the volcanic power from the southeast crater of the volcano. The lava flow (see below) stayed on the path of previous eruptions of 2011, reaching nearly 4 km downslope when all was said and done. Eruptions reader Pgen Pgen created a timelapse of the eruption using the INGV thermal webcam where you can see the volcano go from quiet to eruption and back to quiet.

However, be sure to check outthe great video of the eruption- with sound included! It really shows that roar of gases and tephra escaping the vent during an eruption like this. Stunning stuff. 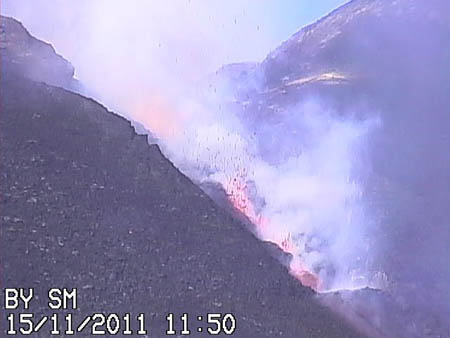 Webcam capture of the lava flow from Etna during the November 15, 2011 eruption. Image by Eruptions reader Kirby.

If you read the Osservatorio Etneo summary of the eruption, you can get all the details but one offhand remark did surprise me: “Finally it is notable that the eruptive activity started just one hour after a magnitude 4 earthquake offshore the northern (Tyrrhenian) coast of Sicily, in the area between Capo d’Orlando and Sant’Agata di Militello.” Now, by no means are they saying that there is a direct correlation between the earthquake (i.e., causation) and the eruption, but rather that the coincidence is interesting to note. In order to prove that there is a connection, additional information would need to be collected over a much larger sequence of earthquakes to see if, in fact, an earthquake of, let’s say, magnitude 3.5 in a 100 km radius, has a predictable and repeatable effect on Etna’s activity. Without this, it is merely speculation that need further examination.

Etna isn’t likely to be finished for the year, so be sure to check out the Etna webcams to catch the action live!

* Other good bets: Kilauea, Sakurajima, Shiveluch … but then again, I’m not advocating gambling on volcanoes. 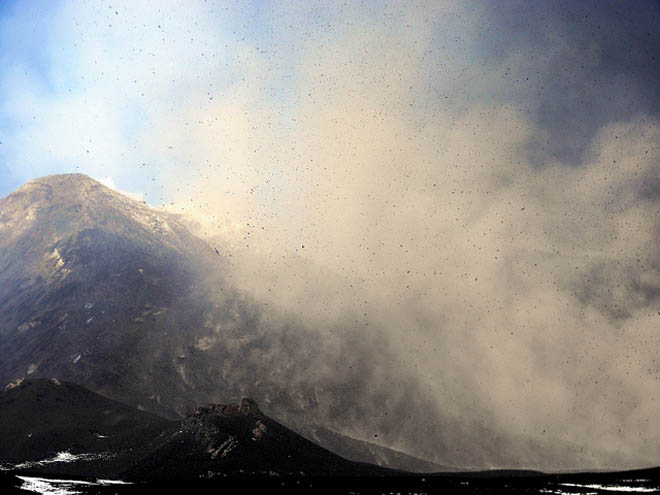 No, your screen isn't dirty, that is volcanic tephra ejected during the November 15, 2011 eruption at Italy's Etna. Image courtesy of Dr. Boris Behncke.