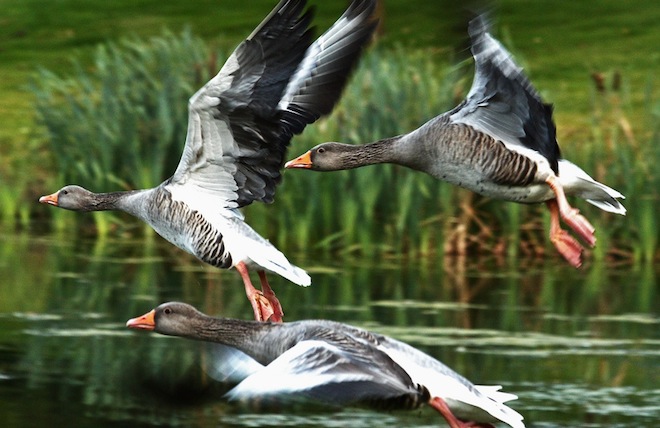 With monogamy so uncommon in the animal world, the idea of lifetime fidelity can seem a little strange, at least to evolutionary biologists.

But in greylag geese, which can live for 20 years and share them with just one mate, biologists have found a benefit: Stress reduction. During fights, males with mates have lower heart rates than their single brethren. If their partners are nearby, they’re even more relaxed.

“It seems to be one advantage of monogamy: If you have a long-term relationship, that helps you cope with stress. It’s a good thing to do compared to systems where you always have to find a new partner and have no support in such situations,” said Claudia Wascher, an ethologist at Austria’s Konrad Lorenz Research Station.

In earlier research, she’d observed how greylag heart rates reflect the birds’ stress levels and can fluctuate wildly during confrontations, which occur often among these highly social, close-living birds.

But Wascher had noticed that while some geese became extremely stressed during fights, others stayed relatively calm. In the new study, she looked for an explanation; it proved to be the geese’s mate status. Average heart rates of males with partners were about 10 percent lower during fights than the heart rates of single males.

'It seems to be one advantage of monogamy: If you have a long-term relationship, that helps you cope with stress.'

While resting, female heart rates rose when their mates were more than a few feet away. Stress dissipated when they returned.

“An increase in heart rate is an investment. You’ll have more energy available. But if you don’t do that, if you’re in safe mode, you’ll save more energy, which could be a long-term advantage,” Wascher said.

Among humans, multiple studies show links between partnership and responses to stress and disease.

Whether and how partnership-induced physiological changes are subjectively experienced by the geese is an open question. Konrad Lorenz, the Nobel-winning ethologist for whom Wascher’s research institute is named, famously believed that greylag geese felt love.

Wascher is reluctant to describe the birds’ feelings, but noted that when a mate dies a goose’s heart rate will drop precipitously and stay low for up to a year. Bereaved geese will eventually find new mates, but for a long time they appear to be sad.

“There is a long-term physiological change, a decrease in metabolic rate and function. You can find terms like depression-like syndrome in the literature, though this is something that is hard to say,” she said. “We are very careful with these analogies. But as intelligent as humans might be, we’re still determined by our physiology. Everybody knows that having a social partner in humans is an important thing. And we’re all socially living vertebrates.”

Not all greylag geese partnerships are heterosexual. Male-male pairs are not uncommon, and triads with two males and one female have been observed. In Wascher’s flock, there were two homosexual pairs.

“We didn’t find any difference between male-male and male-female partners,” said Wascher. “It could be because there were only two pairs, but my guess would be that there’s not really a difference.”