The BBC hid a series of puzzles and clues throughout The Code, a three-part program on the naturally occurring mathematical patterns that shape our lives. Avid puzzlers in the UK used these clues to tackle 84 pages of puzzles before three dedicated players took a trip down to Bletchley Park to tackle a final set of challenges inspired by the historic site. 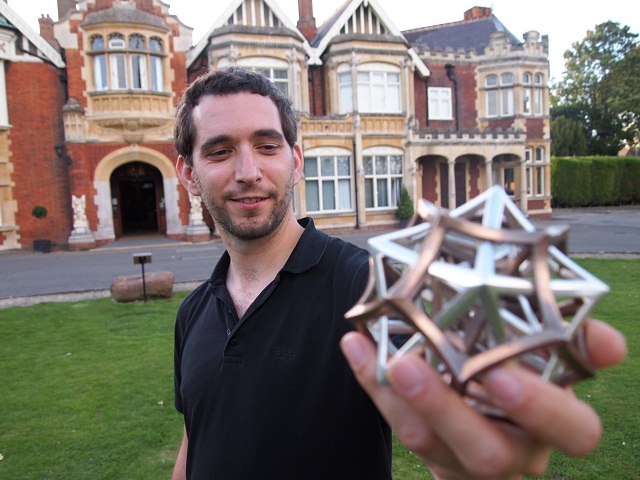 Image courtesy of the BBC

On September 10, 2011, Pete Ryland cracked The Code and took home the coveted prize, a unique bronze and silver mathematical sculpture by Bathsheba Grossman. The lead-up to the tense finale was a collaborative transmedia treasure hunt centred around the three-part BBC2 show The Code, presented by Marcus du Sautoy. The game was designed by Six to Start, working with the BBC from the beginning to integrate clues and puzzles seamlessly within the broadcasts.

Before the first airing of The Code on July 27, about 700 postcards were sent out with an image and a code. Collaborating on Facebook, participants in this first stage soon discovered that each postcard image was a thin horizontal slice of a three-dimensional Platonic solid. Several of these “perfect” shapes then had to be combined and arranged into three concentric spherical shells – revealing the complicated nested sculpture that would be the grand prize.

Now the hunt could begin in earnest. The main stage of the game was intricately connected with the three episodes of the show: Numbers, Shapes, and Prediction. For each episode, participants discovered three clues: one by watching the program, one clue by playing related Flash games on the website, and one clue by solving a puzzle described on the blog. They also had to complete the Prime Number Challenge as a group, which involved uploading photos of all 305 prime numbers from 2 to 2011 to collectively receive the sixth clue for each episode. The six clues were then entered into a codebreaker to reveal three passwords, which granted access to the next stage of the game: The Ultimate Challenge.

The Ultimate Challenge was an 84-page book containing increasingly difficult puzzles. Code breakers continued to collaborate nearly to the very end, but only the first three people to complete the entire book would be invited to participate in the finale and have a chance to win the beautiful bronze and silver mathematical sculpture. On September 2, little over three weeks after the last episode aired on August 10, the finalists were announced: Helen Bennett, Pete Ryland, and Dave McBryan.

This clever trio gathered at Bletchley Park in Buckinghamshire, the place where the infamous Enigma code was cracked during the Second World War. Marcus du Sautoy was there to set them on the three final challenges, all keeping with the Enigma theme. The first task involved discovering “cribs” – repeated sequences – in coded messages to reveal the location, the name of the operator, and the subject of the message. Dave McBryan was the first to complete this challenge and retrieved the folder containing the second puzzle from the historical office of Alan Turing. The second challenge made use of replica Zygalski sheets, perforated overlays that were also used in WWII code breaking. When arranged with the letters across the top spelling “Turing,” the sheets revealed the code word “Signal.” Pete Ryland was the first to crack this code and retrieved the third puzzle from the Bombe-machine room. While the other contestants were still laboring on the Zygalski puzzle, Pete quickly completed the final challenge involving troop movements and discovered the secret message: “I Cracked the Code.” Marcus du Sautoy directed him to Station X, where the treasure was found.

As a transmedia experience, The Code was a huge undertaking. It successfully combined multiple media types, goals, audiences, and playing styles into an all-round experience that told an interesting story about math to people of all abilities. Most successful ARGs generate an immersive experience for a tight-knit community, but they are often hard to join once the sequence of events has begun or for those who are unfamiliar with the setting. The advantage of The Code was that anyone could enjoy dipping in and out of the different stages and puzzles without having to fully participate in the entire game. With my busy lifestyle, I didn’t manage to see each episode in full or complete most of the puzzles, but I did enjoy reading the blog and playing the Flash games. And I even learned a thing or two about mathematics.

Some people have taken in The Code passively, by simply watching the broadcast episodes; some have played the Flash games as casual gamers; some have turned their hand to real-world exploration or artistic photography for the Prime Number Challenge; some have used pen and paper to individually work out the classic puzzles; some have turned their talents to creating spaces for group problem-solving, and others have collaborated in those spaces. And many people did all of these things. It is impressive to see the range of game types and media types and the levels of interaction that were incorporated into this one transmedia treasure hunt.

The entire process has been very well documented, and there is much more to read and discover about The Code on their website, Facebook page and Twitter account, as well as on the unofficial wiki and Facebook fan page. But best of all, The Code is still available to play. Relevant clips from each episode and the associated puzzles and Flash games are still online. The six clues can still be used to unlock the codebreakers and reveal the passwords, which give access to the PDF version of the Ultimate Challenge. Once you have finished all the puzzles, you can even buy your own 3D-printed copy of the treasure to reward yourself for cracking The Code.