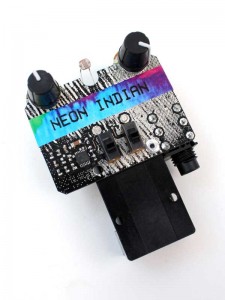 The PAL198X mini synth was sold in a special package with Neon Indian's album Era Extraña.

It can be challenging to get a truly unique sound these days, so Neon Indian’s Alan Palomo created a synthesizer to make music all his own.

The device, called a PAL198X, was created by Palomo with the help of Bleep Labs. The tiny analog synth is powered by a 9-volt battery and uses three oscillators to create funky triangle-wave sounds. Even though the PAL198X is not featured on Neon Indian’s new album, Era Extraña, the synth was inspired by the sounds on the record, and the band has been using ever since the recording sessions.

For a taste of the band’s sound, check out Neon Indian’s new single “Hex Girlfriend,” which the Brooklyn, New York-based band recently performed for web video series For No One (motto: “An intimate glimpse of bands playing to a room without a crowd.”)

Performed at Lincoln Hall in Chicago, it was a bombastic show — despite the lack of audience feedback — and displays all the cool toys Palomo and his band use in their live performances, complete with the trippy lights (video above).

But wait, there’s more! Would you like to win your very own PAL198X synthesizer like the one that was released with Era Extraña earlier this year? Now you can! Wired.com has teamed up with the band to give away one of the Bleep Labs creations. You can hear the PAL198X in action in the audio clip below.

Enter to win the PAL198X by sending an e-mail to underwirecontests [@] gmail.com with the subject line “Neon Indian” and we’ll pick one random winner. Entries must be received by 12:01 a.m. Pacific on Nov. 21, 2011.

Not sure how you would use the damn thing? Don’t worry — there’s an instructional video below.

Neon Indian – Step Into the World With Your PAL198X from Neon Indian on Vimeo.