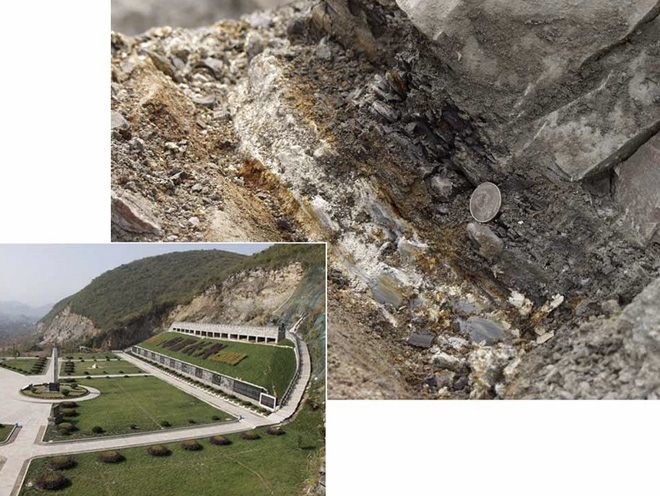 By Richard A. Kerr, ScienceNOW

The biggest volcanic eruptions of the past half eon had seemed a likely culprit in the greatest mass extinction Earth has seen. Now the closest look yet at events 252 million years ago is linking those eruptions even more closely not only to the biotic cataclysm in the sea but also to the mass extinction on land.

An international group of scientists led by paleontologist Shu-zhong Shen of Nanjing Institute of Geology and Palaeontology in China intensively sampled the fossil record, they report today in Science. They examined nine rock outcrops across South China, not just the couple of sites most closely sampled in the past. Each sampling site spanned the mass extinction 252 million years ago at the end of the Permian period. The sites included records from the sea, where fully 90% of species disappeared, as well as from the land.

Shen and his colleagues also used volcanic minerals to gauge when and how fast things happened at each site. Occasional volcanic eruptions had layered minerals throughout the outcrops. In order to date these minerals, the group used the steady decay of radioactive uranium to lead. Even though the eruptions happened a quarter-billion years ago, the method gave them an error of only about 100,000 years. Improvements to the mass spectrometer that counted uranium and lead atoms and to the sample preparation procedure had reduced the dating error by a factor of four.

“What’s striking is how fast the extinction was,” says paleontologist Douglas Erwin of the Smithsonian National Museum of Natural History in Washington, D.C., a co-author on the paper. The event had been seen as lasting half a million years, but the new dating limits it to no more than 200,000 years and quite possibly less than 100,000 years, Erwin says. “We’re paleontologists studying events 250 million years ago,” he adds, so “a hundred thousand years sounds like overnight to us.”

The dating also establishes that the extinction on land, apparently driven by extreme drying and warming, happened simultaneously with the marine extinction. And the new age for the extinction of 252.28 million years puts it within a mere few tens of thousands of years of the humongous lava outpourings that formed large deposits of volcanic rock known as the Siberian Traps. “We think the timing is consistent with the Siberian Traps eruptions being the major cause of the extinctions,” Erwin says.

“It’s quality data,” says Paul Wignall, a paleontologist at the University of Leeds in the United Kingdom. “There was something going on with the eruptions, though we still don’t understand the interaction” with living things. The new study may help answer that question, too. It also refined the timing of geochemical changes, which may hold clues to exactly how the eruptions trigged the biggest extinction. However it happened, the eruptions’ belching—which included greenhouse gases and acid-generating sulfur—must have done in much of the life on land and in the sea.

Image: In China, the Meishan Geopark sits on the outcrop (gray wall, right) containing the most famous record of the greatest mass extinction (inset), the one at the end of the Permian period 252 million years ago. (Shuzhong Shen)