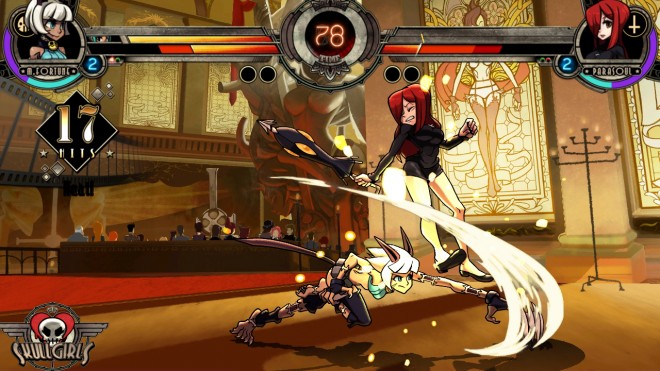 Skullgirls, a fighting game to be released on Xbox 360 and PlayStation 3 next year, flips the gender balance of most games in the genre.
Image: Autumn Games

We speak with the developers of a new 2-D fighting game called Skullgirls, and weigh in on Sony’s ongoing ambitions for 3-D gaming on this week’s episode of the Game|Life podcast.

Wired senior editor Peter Rubin is in New York City this week for the opening of this year’s Wired Store, but we’ve replaced him with several people and one robot. As always, Wired.com managing editor Marty Cortinas and Wired magazine senior editor Chris Baker join me for an hour of discussion about the week’s hot topics in the world of games.

In the middle of this episode, we take a break to listen to some of the Skullgirls soundtrack and speak with one of its creators, Peter Bartholow, and John Lee, a fighting game expert and evangelist of this new downloadable Xbox 360 and PlayStation 3 game, which will be released in early 2012.

We played some Skullgirls prior to the show, and it’s quite an inventive game. The art style is a mashup of art deco and anime, the music reminds me of Marvel vs. Capcom 2‘s soundtrack (which I loved, so shut up if you didn’t) and the characters are hilarious. “Ms. Fortune” can take her head off and use it separately to fight; “Peacock” is a twisted take on black-and-white cartoon characters from the 1940s. It’s a Japanese-style fighting game with a distinctly American vibe.

Other topics covered this week:

The Game|Life podcast is posted every Friday and is available on iTunes and as a direct MP3 download. For your convenience, it is also embedded below.