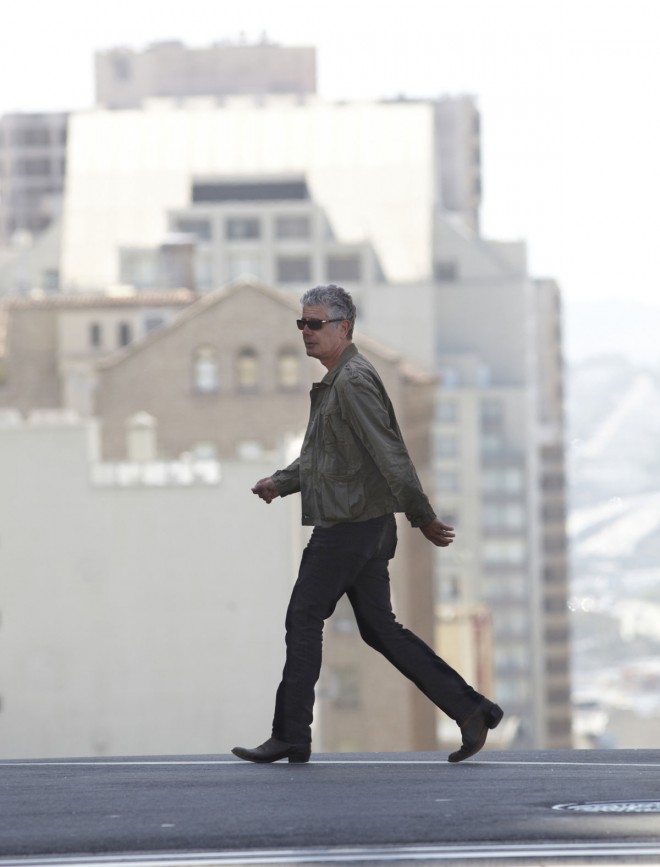 SAN FRANCISCO — Chef and author Anthony Bourdain spent the past seven years traveling the world on his Emmy-winning show No Reservations, taking viewers everywhere from Beirut to Paris to Cleveland. On his new show The Layover, Bourdain brings his food-centric view of the world on a high-speed trip through some of the world’s most iconic cities, showing you what to do if you only have 24 hours there.

Wired.com caught up with Bourdain when he was in San Francisco, after his breakfast of oysters and Chablis at Swan Oyster Depot with Chef Roland Passot of La Folie restaurant, to find out more about The Layover (which premieres Monday on Travel Channel), his film-nerd history and how to optimize your time in a strange city.

Wired.com: What’s the idea behind the new series?

Anthony Bourdain: So much of No Reservations is about me having a self-indulgent good time. A lot of the scenes are things that you just can’t do. So we were thinking, “Can we take the really shopworn informational format that everyone has done, and make it interesting and fun?” This show isn’t that far removed from [Rachael Ray's travel series $40 a Day]. We’re always looking to challenge ourself. How do we take the thing we never wanted to do, and do it our way?

Over the past seven years, we’ve discovered that people are actually planning their vacations around my show. So, this is a show that will actually be useful. Which is something we never considered doing on No Reservations.

Wired.com: How do you keep the storytelling fresh after doing so many shows like this?

Bourdain: Well, it’s a suffocating concept, the food-and-travel show. Every week, I show up somewhere, shove a bunch of food and liquor in my face, and then sum up at the end and go home. So, to find new ways to tell that story, it can be daunting and depressing, or it can be fun. We spend a lot of time to think of ways to do things differently. Can we shoot it backwards? Or in super 8? Or other ways? We aren’t afraid of doing difficult things.

Wired.com: Does that tie into food? Because a lot of chefs you have respect for, they do things the hard way, too. What’s the allure of that?

‘When you go to a place and make food that you’re not proud of for people you don’t like, that’s hell for me.’

Bourdain: I watch people do things that are deliberately lazy and bad television. I can’t imagine being able to wake up in the morning doing that kind of job. I’ve done that in restaurants, and it’s soul-destroying. When you go to a place and make food that you’re not proud of for people you don’t like, that’s hell for me. In food and in making this show, it’s respect for people who came before. You honor the people who taught you, who came before. We use films as a template — that’s who we want to rip off. People who all of us film nerds love. We filmed in China, primarily because I’d been watching a lot of Wong Kar-wai films.

Who have we ripped off? Oliver Stone, Robert Rodriguez, Fellini, Antonioni, we’ve done homages that maybe 0.1 percent of 0.1 percent of our audience got. We like movies.

Wired.com: Have you always been a film nerd?

Bourdain: My dad worked when I was a little boy at Willoughby’s in NYC. He’d bring home 16-mm films over the weekend, generally the classics. I grew up looking at picture books of classic films and then seeking them out.

Wired.com: If we were to drop you into a random city where you’d never been, what would you do?

Bourdain: First, research it. There’s going to be a blogger in every city who’s covered some aspect of that city’s cuisine really well. It might be a guy eating street noodles and dumplings in Hong Kong, or street food in Saigon — there’s somebody out there. I always advise going to the central food market first thing in the morning. You see what the products are, and what’s in season, so you know what will be good in restaurants.

But also, there are always little places for the workers, so you can see what they’re eating. That’s what they think is good. And if you go to that sort of place, you’ll be an outsider. Someone will want to talk to you, someone will try out their English on you. And since people are usually proud of their food, they’ll point you to good places to go.

You learn so much so quickly from what people are eating, and in what circumstances. You see them at their most unguarded and welcoming. It’s a fast route to a degree of access you won’t enjoy otherwise.

The Layover premieres Monday at 9 p.m./8 p.m. Central on the Travel Channel. In the preview clip below, Bourdain gets the scoop on the must-try Singaporean dish chicken rice.

Read 3443 times
Published in News Technologique-Tech News
More in this category: « Darpa: Do Away With Antibiotics, Then Destroy All Pathogens Ultra léger mais très solide »
back to top