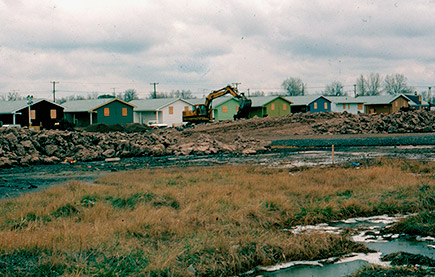 1968: Karen Schroeder, a second-generation resident of the Love Canal neighborhood of Buffalo, New York, gives birth to an infant girl with multiple birth defects. The enormity of the neighborhood’s affliction will take a few more years to come to light.

Love Canal was a never-used, late 19th-century hydroelectric channel that was sold to the Hooker Chemical company in 1942. Between then and 1953, Hooker used the site to bury 22,000 tons of chemical wastes in barrels.

Hooker sold the site to the Niagara Falls School Board for $1, and the board built an elementary school there in 1955. A blue-collar suburban neighborhood flourished around the disused industrial site.

Flourished is probably the wrong word. Schroeder’s parents found black sludge seeping through the walls of their basement starting in the late 1950s. A woman who ran a beauty parlor in her basement developed a debilitating weakness and had to give up working. Trees and shrubs died. Noxious chemical smells hung over the neighborhood.

Schoolchildren developed strange rashes and vague, unexplained allergies. Sometimes, they played with phosphorus-laden dirt that exploded with a crackle when lumps of it were thrown to the ground.

Baby Sheri Schroeder was born with an irregular heart beat and a hole in the heart wall, nasal bone blockages, partial deafness, deformed ears and a cleft palate. As she grew, her family realized she was mentally retarded. Her teeth arrived in a double row on her lower jaw, and she suffered from an enlarged liver.

Heavy rains in the mid-1970s caused groundwater levels to rise. Swimming pools lifted up out of the ground. The buried waste rose closer to the surface.

The U.S. Environmental Protection Agency and the state and county health departments began to take notice, testing the neighborhood’s soil, water and air, as well as blood samples from residents. Still, it was August 1978 before the state health commissioner declared a state of emergency, closed the school and ordered an evacuation … but only of pregnant women and children under age 2.

Soon it was learned that Hooker had buried 200 tons of dioxin at Love Canal, that residents suffered a high rate of miscarriages, birth defects and chromosomal damage, and that 10 percent could develop cancer.

U.S. Rep. Al Gore (D-Tennessee) charged in 1979 that the tragedy had been avoidable. He publicized a 1958 internal Hooker Chemical memo, describing three or four kids burned by materials at the Love Canal waste site. The first lawsuits were filed in 1979.

Early amelioration work released noxious smells in the neighborhood, and the evacuation area was widened. More schools were shut down. Government programs bought condemned homes and tore them down. Hundreds of families evacuated, but 60 families remained behind. Cleanup costs have been estimated at $250 million.

A federal judge eventually found Hooker Chemical negligent but not reckless, and parent company Occidental Petroleum settled with the EPA for $129 million.

An EPA regional administrator called Love Canal “one of the most appalling environmental tragedies in American history.”

The core area around the dump is still off-limits, but new buildings have been built nearby. The neighborhood is now called Black Creek Village.