The Tetrafol Is a Crazy, Motion-Sensitive Musical Pyramid From Fol Chen 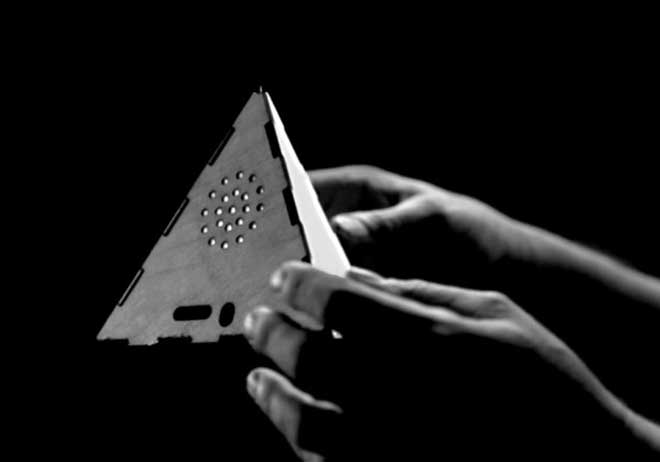 The Tetrafol comes loaded with mini-compositions from Fol Chen. Users manipulate the sounds with motion.

The device, called a Tetrafol, is a wooden tetrahedron that can manipulate sound. Its guts sense orientation and motion and use those movements to modify the playback of sounds. Each device comes loaded with mini-compositions created by Fol Chen, but users of the Tetrafol can also upload their own sounds to manipulate.

“We spend so much time making Fol Chen’s music on a computer, so it’s quite liberating to have an object that can manipulate sound — especially pitch and speed — through movement,” said band member Julian Wass in an e-mail to Wired.com. Wass and bandmate Samuel Bing created the Tetrafol with help from instrument maker Monome and Machine Project.

Monome, which also created one of DJ Deadmau5’s favorite gadgets, designed the Tetrafol to be battery powered and easily connected to headphones or external speakers. Its circuitry and firmware are open source and each unit is assembled by hand. Machine Project is selling a limited run of 100 of the devices for $110 each. Grab one here.

“First and foremost, we wanted to create an object that people could use to make their own music, so it had to be something that we ourselves would find fun and useful in the studio,” Bing said. “At the same time, we wanted to make a cool-looking toy that non-musicians could play with just for the pleasure of making weird sounds.”

Want a taste of what the Tetrafol can do? Check out Fol Chen’s track “So Good,” made with sounds that come preloaded on the device, below.

Fol Chen — “So Good” by WeGetPress

Read 5500 times
Published in News Technologique-Tech News
More in this category: « Droits d'auteur : Besson veut s'attaquer au streaming The Trials and Tribulations of HTML Video in the Post-Flash Era »
back to top