Occupy Boston Gets Legal Cover, But Not All Protestors Like It 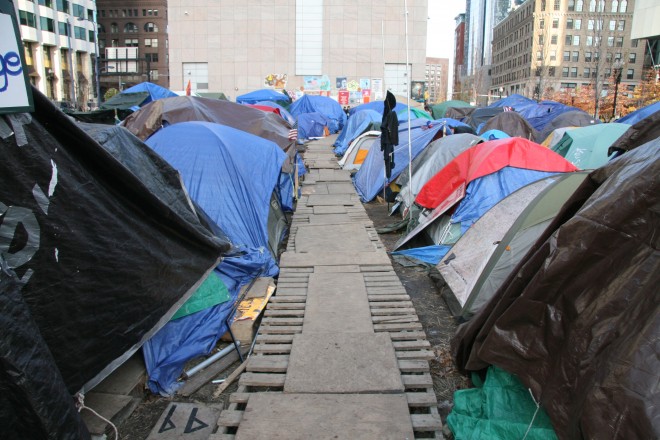 The Boston Occupy protest at Dewey Square is at the heart of a court battle over whether Occupying is protected by the First Amendment. Photo: Quinn Norton/Wired

Occupy Boston finds itself in an odd position – it’s actually protected from eviction by a judge, but some participants aren’t aren’t selling out by signing on to the authority of a system they are protesting.

On November 15, the same day that the NYPD raided and evicted Occupy Wall Street, the National Lawyers Guild and Massachusetts ACLU went to court to get an order preventing Boston police from evicting Occupy Boston from its space at Dewey Square, underneath Boston’s iconic Federal Reserve building.

The move was considered to be approved by Occupy Boston’s General Assembly – the collective decision making body of the occupations, according to K. Eric Martin, one of the occupiers and a plaintiff in the case.

“The legal team had already put forth a proposal to the General Assembly that was passed a few weeks prior to prepare legal action for the imminent threat of eviction,” he said, “They acted on that previous general assembly approval, went forward and filed the paperwork.”

The city protested that an injunction was premature and that they’d need the element of surprise for an easier, safer eviction if they did choose to remove the occupation.

Judge Frances McIntyre appeared dismayed by this argument, according to Martin, and was sympathetic to the plaintiff’s argument that occupying the park physically is a free speech issue.

In her November 17 ruling granting the restraining order, McIntyre wrote, “Unlike the circumstance involving Zuccotti Park in New York and Occupy Wall Street, it is undisputed that Dewey Park is a traditional public forum.”

Read 4611 times
Published in News Technologique-Tech News
More in this category: « Occupy Boston Gets Legal Cover, But Not All Protestors Like It What HP's Big Bet on WebOS Cost the Company »
back to top