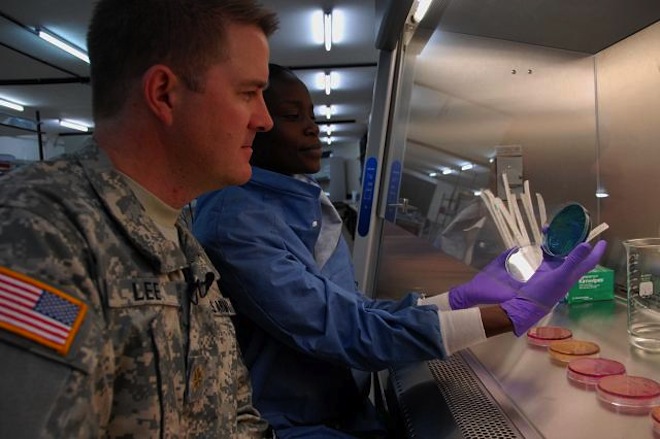 Imagine if giving docs a single drop of semen was all it took to keep you healthy. Your dream could soon become a reality, as the Pentagon pushes for every male soldier to hold his health, quite literally, in the palm of his hand.

In a solicitation released last week, Darpa, the Pentagon’s far-out research agency, is asking for technology that’d replace good old diagnostic standbys — a vial of blood or cup of urine, for example — with “a portable format” that’s about the size and weight of a credit card. The initiative is one part of the agency’s $25 million Autonomous Diagnostics to Enable Prevention and Therapeutics (ADEPT) program, that aims to provide soldiers with veritable “on-demand” health care. Basically, Darpa wants diagnosis and treatment that troops can administer themselves, instead of relying on medics or waiting to make it to a combat hospital. This is the first of the program’s undertakings, but Darpa also plans to invest in quickie diagnostic tests and on-the-go immunity boosters.

It might be the first phase of a bigger project, but Darpa’s initiative is hardly going to be an easy undertaking. Right now, biospecimens like urine or semen are collected and stored in relatively large sample sizes and in sterile conditions. Not to mention that collecting most samples requires lab technicians and other trained experts (or, at the very least, a generous stack of specialty magazines). These kinds of logistical limitations are a major problem for military health care — especially when illness strikes somewhere remote.

Darpa’s pocket-sized biospecimen gizmos would overhaul the entire process. A soldier would collect his or her own biospecimen, which suggests that semen, urine, hair or spit would be prime contenders for the project. Then he or she would rub it onto a card that “allows stable shipment to a distant site for analysis … with minimal degradation of biomarker integrity.” The solicitation doesn’t mention any fancy uploading or data transmission abilities, so presumably Darpa, for all its high-tech ambition, imagines the specimen cards shipped off to labs through the old-fashioned mail.

Still, the cards could offer valuable insight into the health of soldiers. Saliva tests can diagnose hormonal imbalances and thyroid problems, for example, and a splash of semen can show elevated white blood cell levels that signal infection. Not to mention that researchers are rapidly making inroads into using simple biospecimen tests for a multitude of other diagnoses, from cancer to brain injury.

Depending on the specimens the card is designed to collect, Darpa wants researchers to figure out how that sample could stay sterile “under conditions that are absent of power, temperature control or other inputs.” Dried blood spot (DBS) cards, which are often used in developing countries to test for Vitamin D deficiency or infant HIV, are the closest existing technology to Darpa’s goal. But even decades after their development, the cards remain seriously flawed: Blood specimens can only be preserved at certain temperatures, the cards are susceptible to contamination and, of course, samples require a needle prick.

Obviously, Darpa-funded scientists will have their work cut out for them. But if successful, the project could do more than just make diagnosing anything, anywhere, a possibility for soldiers and civilians. Darpa hopes to improve treatment, by allowing doctors to remotely track a patient’s response to medication, and clinical trials, by giving researchers access to specimens taken from soldiers in combat. Not to mention that for some illnesses, and at least where male soldiers are concerned, there’s also the prospect of a little extra stress relief.

Read 4395 times
Published in News Technologique-Tech News
More in this category: « Siri Hacked to Control a Thermostat -- What's Next? Senator Promises To Filibuster Internet Blacklisting Bill »
back to top