Why do Police Officers Use Pepper Spray? 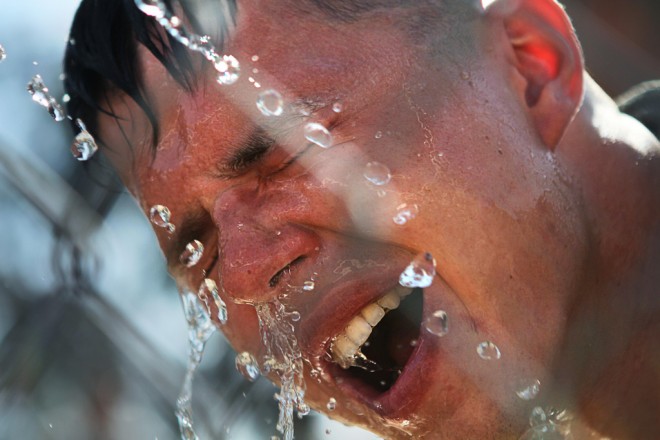 When pepper spray became a mainstream law enforcement tool in the 1990s, it was hailed as a relatively peaceful alternative to harsh physical violence.

But as demonstrated by the routine spraying of Occupy Wall Street activists, culminating in the horrific assault at the University of California, Davis, pepper spray can too easily become a tool of first and excessive resort.

“I can’t get into the head of people using it in New York and Davis and around the country, but it seems that rather than turning to other tactics, they turn to the simple tool,” said Geoffrey Alpert, a professor of criminology at the University of South Carolina. “There’s an overreliance on technology.”

The incident at UC Davis, where campus police officers sprayed Defense Technology 56895 MK-9 Stream directly into the faces and mouths of sitting students, provoked both moral disgust and a renewed attention to the physical dangers of pepper spray. Far from being what one Fox News pundit called a “food product,” pepper is a dangerous and sometimes deadly weapon.

Receiving relatively less attention is the psychology underlying pepper spray use, which hasn’t been studied much but parallels the use of Tasers. Like pepper sprays, Tasers were supposed to be tools of intermediate physical force, an alternative to hitting a resisting suspect with batons or grappling them to the ground. But Tasers also became alternatives to less-violent tactics and were used in situations where suspects had not physically resisted arrest.

Rather than talking, police too often go straight to the electricity — and the same may also happen with pepper spray.

“When you have something that is readily available to you, something that’s on your belt like pepper spray, and you have a confrontation in front of you — the first thing you’re going to do, because you’re human, is use whatever is right there,” said Ana Yáñez-Correa, executive director of the Texas Criminal Justice Coalition, a non-partisan group that has successfully lobbied to make pepper spray less readily available to law enforcement officers in that state’s youth correctional system.

“All of the training that you might use, anything that allows you to use your other skills, goes out the door,” Yáñez-Correa added. “The first thing you do is say, ‘I’m going to pepper-spray that kid.’ That’s a natural response.”

‘The use of spray may not necessarily be an alternative to force, but provides officers with options to use more force — perhaps unnecessarily. In other words, if it is there, they will use it.’

Indeed, while law enforcement scholars unanimously acknowledge that, on a per-violent-incident basis, pepper spray results in fewer injuries than direct physical violence, research suggests that having pepper spray could lead to higher numbers of violent incidents.

In one analysis, criminologists found that police use of force rose by 33 percent in Concord, North Carolina following the approval of pepper spray as a law enforcement tool. After an arrestee died in custody after being sprayed, pepper spray use was restricted; use-of-force incidents then fell by 57 percent, even though arrest rates rose by almost 4 percent.

“This suggests that the use of spray may not necessarily be an alternative to force, but provides officers with options to use more force — perhaps unnecessarily. In other words, if it is there, they will use it,” wrote that study’s co-authors, criminologists Paul Friday and Richard Lumb of the University of North Carolina.

That the number of times police used force seemed disconnected from threats to public order led Friday and Lumb to hypothesize that having pepper spray could change how officers behaved.

“Do officers become more assertive in suspect confrontational situations when they are ‘armed’ with an additional tool? Does the possession of OC spray unreasonably increase the sense of self-confidence and security and thereby create a self-fulfilling prophecy of threat?” they wondered. “While OC spray, when used, reduced injuries, does its mere possession increase the potential for physical force being used?”

Two studies conducted in the Netherlands showed that pepper spray was useful for subduing violent subjects, but actually caused non-violent situations to escalate into violence — and about 10 percent of all uses were carried out against non-threatening subjects.

In a 2010 Police Quarterlyreview of Taser use and safety, Alpert and University of Miami criminologist Roger Dunham recommend rigorous studies of how carrying Tasers changes threat perception in police. The same studies could also be carried out on pepper spray.

“In their culture, it’s important to have authority. Most policemen will say that the only thing they have to protect them is authority, and they’re very sensitive to people who do not respect their authority,” he said. “When an officer gets on the scene, the number-one thing they’re supposed to do is take control” — and that dynamic is heightened when they know that other police will judge their actions.

“If you’re sitting there, and I give you a lawful order to move, and you lock arms, is that an act of resistance? I don’t see it that way. Some people do,” said Alpert.

In light of that dynamic, departmental recommendations against using pepper spray on nonviolent arrestees may be needed. About 45 percent of U.S. police agencies now allow pepper spray to be used in response to passive resistance, like that seen at UC Davis.

Restrictions on pepper spray use could force police to fall back on less-violent tactics, such as verbal deescalation. Failing that, Alpert said the UC Davis police could have pressed on protesters’ pressure points or used batons to pry them apart.

“You don’t need the level of pain of a taser, hitting with a baton or pepper spray,” Alpert said. “In many ways, we should go back to some of the older, more traditional ways of dealing with people. If you can’t talk reason with them, and you have legitimate authority to use force, you can start slow and see what’s going to happen. Use brains, not brawn.”