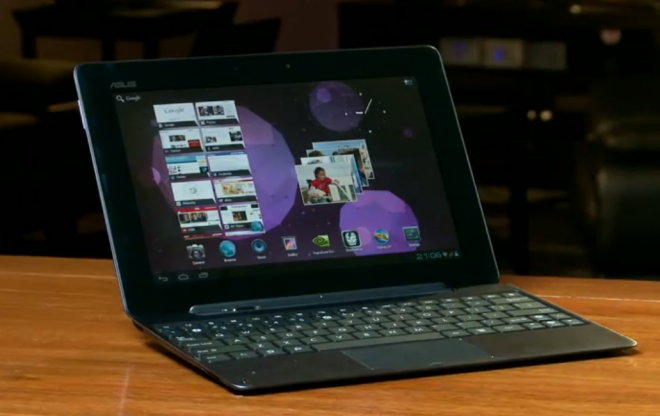 We’ve already seen Android 4.0, aka Ice Cream Sandwich, or ICS, run smoothly on a phone. But the real draw is seeing how well it performs on a tablet, as it’s the first version of Android designed to run on both smartphones and tablets.

Well, the wait is over. On Tuesday, Nvidia released a video of Asus’ new Transformer Prime Android tablet running the new, tasty, Androidy treat. What’s more, the tablet is powered by Nvidia’s recently unveiled Tegra 3 quad-core CPU, the most powerful mobile processor announced to date. Though the footage is meager, the Prime seems to run ICS effortlessly.

At first glance, it looks as if the Transformer Prime is still running the same old Android 3.0 Honeycomb OS, with which we’re all familiar. The home screen still displays recently opened pages in small window panes, while lining the bottom of the screen with user-selected apps.

But soon after we’re introduced to the tablet, the demo shows off the subtle differences between the two software versions. ICS brings a new “transition effect” to swiping between app menu screens, seamlessly elevating one layer over the other when the user moves her finger back and forth. The example in the video shows the movement between the apps menu and the widgets menu, another new feature found in ICS.

Conveniently enough, apps on the menu screen can be clustered together in groups, organized by any sort of category you designate (so a “social” folder category may include my Facebook, Twitter and Google+ apps).

The demo finally shows off some of the Prime’s raw power, with two tests of the Tegra 3’s performance. First, a 1080p video looks to run smoothly, while a jaunt through a graphics-intensive app utilizes “all four cores built into the Tegra 3,” enhancing the in-game looks.

It’s just a taste of what we’re to expect from ICS on tablets. Unfortunately we don’t have a solid release on the Prime, and we aren’t sure if another tablet running ICS will appear before the new Transformer. With any luck, the debut of ICS on tablets will bring to light other easter eggs we’ve yet to see.

Read 3150 times
Published in News Technologique-Tech News
More in this category: « 10 Things Parents Should Know About The Muppets Nuclear Battery Will Warm Giant Rover on Frigid Mars Treks »
back to top