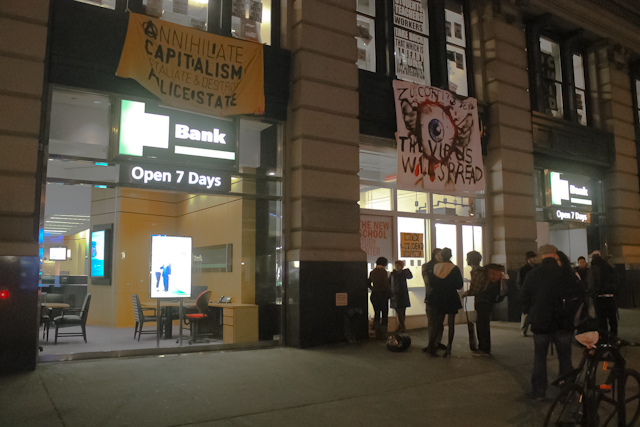 A wide swath of New York City students are angry about debt, tuition hikes and what many consider to be a lack of openness from the administrations of public and private colleges. Students have been a major force in Occupy Wall Street, dating to its first General Assembly on August 2nd in New York City.

But in the past week, they’ve been intensely directing the movement back to campus, at the same time that Occupy protests have become big news at both UC Berkeley and UC Davis.

On Monday afternoon, a contingent of a several hundred students marched from Madison Square in Manhattan to a Board of Trustees hearing across town at Baruch College, part of the City University of New York. CUNY, as it’s called, was formerly a mostly free network of colleges, funded by the city and the state. But since the City’s financial meltdown in 1975, it has charged tuition for some students. However, according to a CUNY spokesperson, 58.8 percent still pay nothing, due to their financial need.

A handful of students had registered to speak at the hearing on the 14th floor of Baruch’s William and Anita Newman building. The hearing was open to all kinds of topics; the students planned to address tuition increases.

Meanwhile, roughly 100 others held a boisterous “general assembly” meeting in the first-floor lobby. Accounts differ about who started shoving, but ultimately the students were pushed out by CUNY security guards, and 15 were arrested. Students blame CUNY, using videos they shot as evidence. CUNY blames the students. [Link] 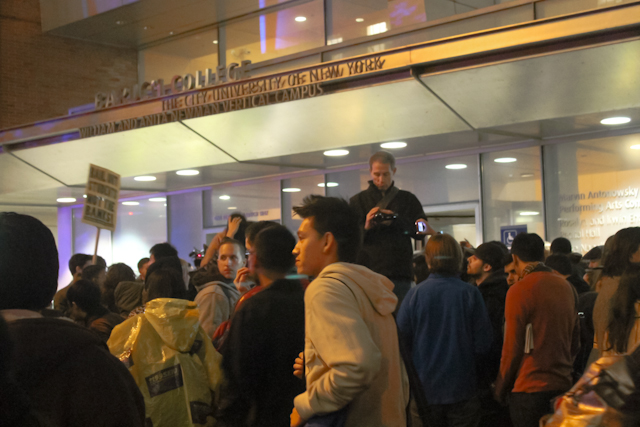 “I was thrown out like a dog,” said 22-year old Venetia Biney, a political science and journalism undergrad and protest organizer from CUNY’s Hunter College. She said that three security guards lifted her up and tossed her out onto the pavement. Two other Hunter students, Angelica and Leila, said they had been hit and shoved.

Venetia Biney is not stranger to CUNY. Her grandparents immigrated to the U.S. from Ghana. Both attended CUNY – as did her mom, uncle and aunt. Her grandfather became a political science professor at the institution.

Now Biney complains of deteriorating conditions at Hunter and other CUNY colleges.

“When it rains outside, it rains inside the building,” she said. “We have mice.”

Is that an example of why the schools need more money?

It might be, but Biney isn’t confident that the money is being spent well.

“If there was some documentation that would allow students to properly understand why the tuition was being raised…, I think that students would be more forthcoming in trying to work with the university and the board of trustees,” she said. For its part, CUNY says that all information is made public and that the tuition hike will be at most $300 per year for the next five years.