iPad 3: Super-High-Res Displays a Go, But Yields Will Be Low 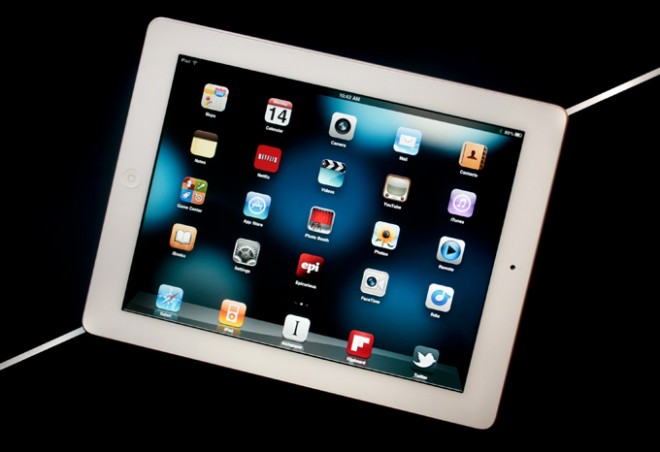 By all accounts, the screen in the upcoming iPad 3 should be two times more spectacular than the display in the iPad 2, shown here. Photo: Jim Merithew/Wired.com

It’s the most definitive assurance yet that Apple’s next iPad will include a screen with a near “retina display”-quality resolution: DisplaySearch analyst Richard Shim has told CNET that “production has started” for 2048×1536, 10-inch-class tablet screens, and three manufacturers — Samsung, Sharp and LGD — are supplying parts to Apple.

“It takes a couple of weeks for the production to go to the [the manufacturers],” Shim told CNET. “Then the manufacturer puts them in the housing. Then, that goes off to shipment. We could start seeing finished devices produced in December. And then being ready to be shipped in January. With volumes gearing up in February and March.”

Just three weeks ago, when I directly asked DisplaySearch Senior Vice President Paul Semenza if he thought Apple would be able to deliver an iPad 3 with a 2048×1536 screen resolution by the first quarter of 2012, he told me, “We don’t have a forecast on it, no. But I wouldn’t be surprised if they don’t get there. They’re dealing with a lot of new technologies.”

Indeed, producing relatively small, ultra-high-resolution displays is still a significant manufacturing challenge. The display industry’s manufacturing infrastructure hasn’t been optimized to deliver this type of display, and the fabrication machines — or “fabs” — that would produce the displays in mass volume have been slow to go online.

What’s more, because their pixels are so small, and packed together so densely in such small physical spaces, it’s very difficult for a manufacturer to maintain high production yields (a problem exacerbated by the slow roll-out of appropriate manufacturing machinery). Multiple displays are fabbed on a single poly-silicon wafer, and for every perfect display a fab produces, it may have to junk another.

“We know there are yield issues. This is certainly a huge step up as far as pixel format, and every time you do that, there will be yield issues. But this is going forward,” said Rhoda Alexander, director of tablet and monitor research for the research firm iSuppli.

So what’s a “yield issue” anyhow? It’s a term that’s been casually tossed around anytime the iPad 3’s super-high-res display is discussed — but what does it really mean?

“There are a number of reasons why a panel would be rejected — a dead pixel, a pixel stuck on, a pixel stuck off. You may get issues where luminescence is inconsistent from edge to edge, and all manner of other problems,” Alexander says.

Yield issues notwithstanding, industry analysts now seem confident that Apple is moving forward with a super-high-resolution iPad for sale in the new year, and if history tells us anything, the company is willing to pay high manufacturing prices up front for the promise of delivering a high-impact product that no other company is shipping.

In fact, says Alexander, Apple has been down this road already with the original iPad.

“When we look at the iPad 1,” says Alexander, “when it was first released, the yield issues were down around 50 percent. For every 100 panels made, 50 didn’t make spec. This is not an unusual situation, and this is at the point when the iPad 1 was released. So, while yields may be low, [the display manufacturers] can still produce acceptable products. But they will improve their yields and at a faster pace than you would expect them to. Panel prices go down over time, and Apple will realize efficiencies over an entire product cycle.”

It should be noted that if the iPad 3 arrives with a 9.7-inch, 2048×1536 display, that screen’s pixel density would still be 264 pixels per inch — far short of the 300 pixels per inch that Apple defines as “retina display” quality (“a pixel density so high that the human eye is unable to distinguish individual pixels,” according to Apple marketing claims).

Whether Apple’s retina display claims are valid — when the iPhone 4 launched, one of the world’s pre-emininent display experts told us they’re not — the new iPad 3’s screen should still be spectacular. The current iPad 2’s display bears a pixel density of just 132 pixels per inch, so a purported 264 pixels per inch in the iPad 3 should be dazzling.

Perhaps even more dazzling: Shim told CNET that Apple is interested in making a smaller iPad with a 7.85-inch screen and late 2012 launch date. “If there’s demand, there’s no reason they wouldn’t build a 7.85-inch iPad,” Shim said.

Right. No reason save the fact Steve Jobs was vehemently opposed to smaller tablet formfactors. Seeing Tim Cook scuttle the mandate of Steve Jobs post-mortem would be a spectacle indeed.

Read 3356 times
Published in News Technologique-Tech News
More in this category: « Why Smartphone Commercials Are Making Us Stupid 'Flash Robs': Trying to Stop a Meme Gone Wrong »
back to top