Frigid Months Still to Come in a Warming World 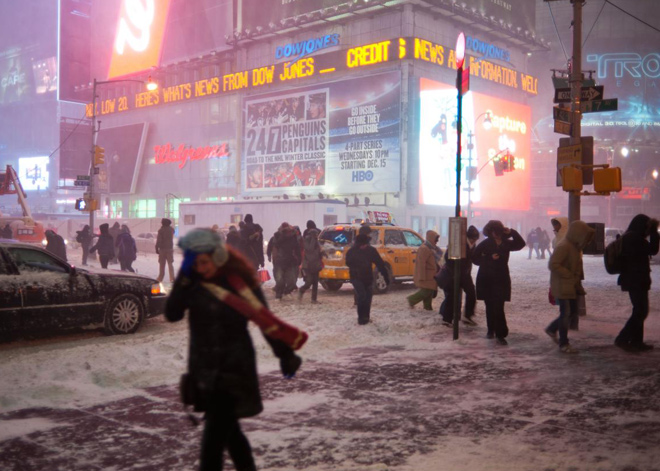 For those who dread the heat that climate change threatens to bring in coming decades, take comfort. In a world plagued by gradual warming, there will still be cold months — even ones with record cold temperatures, although they’ll be far less frequent than they are now, a new study suggests.

December 2010 was the coldest December in northwestern Europe for more than a century. Although such cold periods may seem incompatible with the notion of global warming, they’re not, says Jouni Räisänen, a climate scientist at the University of Helsinki. They’re just a matter of statistics.

To illustrate the point, Räisänen and his Helsinki colleague Jussi Ylhäisi analyzed how various greenhouse gas-emission scenarios would affect Earth’s climate during the next four decades. In particular, they used 24 different climate models to assess monthly global average temperatures for continents outside of Antarctica from 2011 through 2050. In such a 480-month period, statistics suggest that half of the months would be cooler than average and that 48 of them would fall into the coolest 10 percent of months. On average, the researchers suggest, five of the months would be record-breaking cold as compared with the same months from other years.

But when Räisänen and Ylhäisi compared their results with actual climate data collected during the 20th century, cold periods were much less frequent, they report online this month in Geophysical Research Letters. For instance, only 68, or about 14 percent, of the months from 2011 through 2050 were colder than average by 20th century standards. Only 6 months, or 1.3 percent, fell into the coolest 10 percent of months. “Cold months still occur in a warmer world,” Räisänen says. “They just happen quite infrequently.”

Unsurprisingly, not all parts of the world are affected equally. In the tropics, where climate typically doesn’t vary much, almost all months in the coming four decades are warmer than average by 20th century standards, Räisänen says. In high-latitude areas of the Northern Hemisphere, where climate is predicted to warm more than in the tropics, cooler-than-average months are still likely to occur, the researchers found. That’s because, in the short term, climate variability in those areas statistically overwhelms the gradual rise in global average temperature, more effectively masking the ongoing change.

The team’s results are counterintuitive in some cases, but they are consistent with those recently reported by other teams, says Reto Knutti, a climate scientist at the Swiss Federal Institute of Technology in Zurich. In the absolute sense, he notes, the increase in average temperature has been larger in arctic regions in recent years. But because the range of temperatures is so narrow in the tropics, he adds, long-term changes in climate show up more quickly there, even though they’re smaller than those occurring elsewhere in the world.

Image: Climate change is expected to continue in the coming decades, but a new analysis suggests that record-cold months, although less frequent than now, will still occur. (Dave Mosher/Wired.com)