Vanished Helps Kids Save the Future with Science

For eight weeks, the MIT Education Arcade and the Smithsonian Institute put on an alternate reality game seeking to engage children with the scientific method. The game attracted thousands of players gathering data to assist scientists from a cataclysmic future. 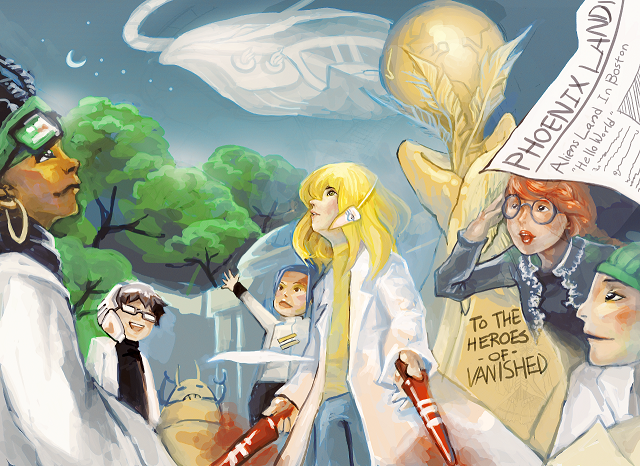 Scientists from the future reached out to present day scientists as part of Project Phoenix to investigate a natural disaster that wiped out the historical record as part of Vanished, an alternate-reality game designed exclusively for children. The game was a collaboration between the MIT Education Arcade and the Smithsonian Institution, and sought to engage kids and teens in the role of scientific detectives and inspire scientific learning through an epic story. Prior to the game’s launch, ARGNet provided a sneak peek at the upcoming campaign. Now that the game has come to a conclusion, I followed up with Caitlin Feeley and Dana Tenneson of MIT’s Education Arcade to take a postmortem look at the game.

The true heroes of Vanished were the players, who uncovered the mystery by making scientific progress week by week. The game was also populated by a full cast of characters; the most prominent was Lovelace, an artificial intelligence who traveled back in time to assist in the investigation. Moderators had in-game personas, like Storm and Megawatt, who played the roles of guardians and guides. The journey also involved interacting with real-world scientists from a variety of fields, and players even encountered a few villainous trolls and hackers among their own ranks before reaching the end.

Vanished began when members of Project Phoenix, who are scientists in the future, contacted players through the game site requesting their help to gather data to test their hypotheses about the disaster, called the Epoch. Players had to gather temperature data, photograph plants and animals, and figure out how to convert present-day units of measurement to those used in the future. They determined that an asteroid strike caused the Epoch hundreds of years in the future. That raised questions about what the future was like and why humans didn’t stop the asteroid. As the game continued, players discovered that global warming cause society to collapse, causing mass starvation and technological regression. When the asteroid approached, humanity was unable to muster a response and went extinct. Project Phoenix wasn’t comprised of future human scientists; they were from another world. Just by discovering this, players discovered that humanity has the possibility of changing the future. 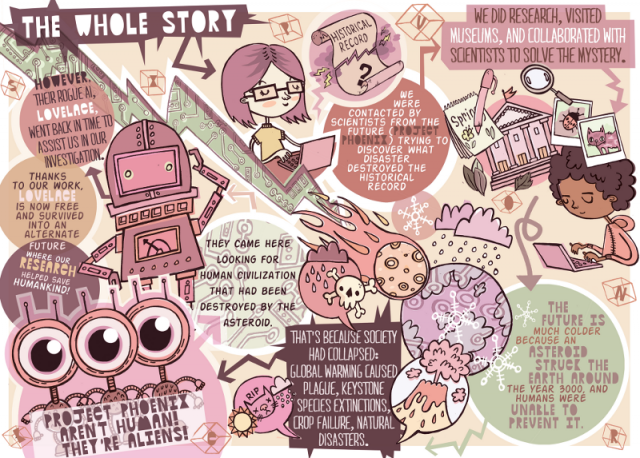 The Vanished team sought to invite players during the lead up to the game through outreach from the Smithsonian and press. Player recruitment expanded organically as players pulled in their friends to join the fun, while the home-schooling community provided its own influx of players. There was significant international participation, despite the game’s U.S.-centric design focus. Over 6,700 player accounts registered, plus an additional 3,000 watcher/adult accounts; over a thousand players remained active through to the game’s finale. The Vanished team attributed this high level of active participation to the tight player community that formed over the game’s eight-week run.

One design goal for Vanished was to “squash the pyramid” by encouraging traditionally casual players to take a more active role. Typically, participation in high engagement campaigns like alternate reality games are expected to take the shape of an inverted pyramid, with casual players forming the base, supported by the efforts of the highly engaged few at the top.  To encourage active collaboration, players at received one of 99 unique codes at the beginning of Vanished, and the players had to assemble every code to advance. Assignment was random, so players actively solicited others to speak up and become involved. As the game progressed, players received achievement points for their participation, which could be spent to unlock documents. Many documents required more points than any single player could afford, and so players had to pool their points together as a team. While presenting Vanished at GDC Online in October, Scot Osterweil and Feeley cited improvements to the traditional “90-9-1? player percentages of casual-active-enthusiast to 69-25-6 – tripling the active participants, with a large number of players serving as heavy contributors.

Players were allowed the freedom to discuss and critique the game as they chose. The forums were moderated, but moderation was limited to ensuring that content was age appropriate and that no players were posting personal information. Largely the players self-regulated; if someone trolled the forums, players told them to leave rather than ruin the experience for the group. When a player proclaimed “this isn’t real, it’s all fake,” moderator Storm replied in the forums, “please don’t tell [moderator] Megawatt, she’s been here for 14 hours, she’ll rupture a blood vessel if somebody tells her.” No one brought it up again. Only one troll was ever banned by moderators for repeat bad behavior.

Hacking stories flooded the news this year, so it was not surprising that a hacker emerged from within the player ranks. Anti-QWERTY found a way to unlock documents on the site without spending points. Instead of exploiting the weakness, he presented the issue to the forums. The players overwhelmingly asked Anti-QWERTY not to abuse the hack any further; they were having too much fun with the game. Anti-QWERTY privately revealed details of the hack to the moderators so that they could fix the site, and balance was preserved. The developers created a unique “White Hat Hacker” achievement and awarded it to the player.

Building community and showing that the players valued their experience powerfully demonstrate excellent game design, but the content focus of Vanished was teaching scientific skills and instilling lifelong subject interest. This is a much more difficult objective to assess, but anecdotally it was a great success. Video conferences with scientists engaged otherwise quiet kids, and players across the spectrum demonstrated the transfer of newly learned knowledge to game puzzles. Initially, players had to be instructed to move beyond the initial step of creating a hypothesis, to figuring out a way to test each hypothesis. Once they had a direction, players jumped to execute.

Feedback from the participating Smithsonian museums was also highly positive. Kids visiting didn’t perform “badge checking,” a common behavior where players try to complete a checklist at maximum speed at the expense of immersing themselves. Vanished avoided sending players to answer specific questions, instead guiding them to gather information that might be applied to the week’s scientific subjects. The players seemed interested to learn about the subjects with a broader perspective. Players applied this broader knowledge to the puzzles they encountered online and critically thought through problems.

Feeley and Tenneson spoke particularly of a seventh-grade teacher working with at-risk students, who contacted them after Vanished concluded. The teacher had to jump through hoops to get permission from his school and the parents in order to have his students participate, but claims Vanished transformed his class. The students were fascinated and engaged week after week, and many expressed a desire to be scientists as a result of their experience.

The team at MIT learned a number of lessons from Vanished that they hope to apply to future games. At the top of their list is the creation of additional characters; interaction with the game’s characters was a favorite part for many players, and strongly promoted engagement. The Lovelace AI began with a basic set of phrases, and the players actively taught her to improve her language when they realized she could learn. When Lovelace made comments that they perceived as rude, players reprimanded her extensively about “human etiquette.” When Lovelace was aggressive toward the moderators, players were protective and made it clear her behavior wouldn’t be tolerated. Characters like Lovelace require a real person to manage the character’s conversations and development, so additional characters would in turn require a larger staff.

For future iterations, the team wants to further improve “pyramid-squashing” and their community outreach. Flash games did a fine job of providing casual players with something to do, but also allowed some players to remain at the outskirts of the community. The response of the home-schooling community was also stronger than expected, and merits extra communication for future games. The team also plans on working closer with participating museums to create recurring events instead of tying events to a specific time. For those players unable to reach the museum at a specific time due to family schedules or distance, it would open up greater participation. Teachers who followed Vanished expressed a desire to be notified ahead of time about future games; with enough lead time, interested teachers will be better prepared to involve their students.

The promise of additional games from the MIT Education Arcade is more than lofty hopefulness, based on the success of Vanished. There has been a strong response from outside parties interested in their own games, including major publishing, tech, and arts institutions.

At the end of Vanished, players concluded their epic journey as heroes. They saved the world. And yet, saving Earth from a fictional future disaster was a vehicle for the game’s educational goals; players learned critical scientific skills, were inspired to pursue science on their own, and may follow new careers that will produce material discoveries and changes in the future. If an environmental disaster does occur, they may just save the world for real.

As a present to players, one of the team artists created a thank-you comic of a scene from the end of the game, featured at the beginning of this article. Though the Lovelace AI had never been visualized during the game, players uncovered an image of Lovelace hidden within the comic. Can you spot her? If you have trouble, check out the original Lovelace sketch for reference.