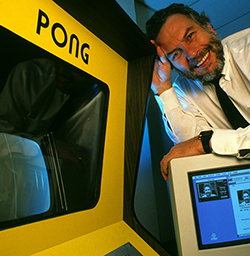 1972:Pong, the first popular videogame, is released in its original arcade-game form.

If it seems crude by today’s standards, well, it was crude then, too. And it was meant to be. Pong was the brainchild of Nolan Bushnell, a founder of Atari, who was inspired to develop it after playing an electronic table-tennis game at a trade show. But, having recently designed an arcade game he deemed too complicated because you had to read the instructions before you could play, Bushnell strove for utter simplicity.

“I had to come up with a game people already knew how to play, something so simple that any drunk in any bar could play,” Bushnell said later. The game, actually designed by Atari engineer Allan Alcorn, was Pong. It was indeed a game that drunks could play, and they did.

The first coin-operated Pong arcade game was installed at Andy Capp’s, a tavern in Sunnyvale, California, where Atari was located. It was an instantaneous hit, confirming Bushnell’s suspicions and vindicating, yet again, H.L. Mencken’s famous dictum.

Four months after its appearance at Andy Capp’s, there were upwards of 10,000 Pong arcade games scattered across the land. This caught the eye of Magnavox Odyssey, developer of the game that had inspired Bushnell to dream up Pong. A lawsuit followed, resulting in an out-of-court settlement in Magnavox’s favor. By then, however, Pong had moved to a home-console model, which was very different from the original.

Bushnell cut a deal with Sears to act as Pong’s exclusive retailer, and the 1975 Christmas shopping season was a lucrative one. This can fairly be said to have ushered in the era of home videogaming.