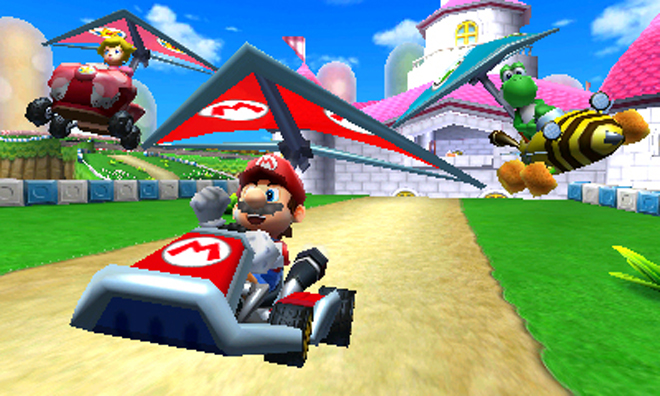 Here is the best thing about Mario Kart 7: This time, Nintendo didn’t screw it up.

When you think of Nintendo’s hit products, you don’t necessarily think of the Mario Kart racing games (specifically) as a dominant part of the 3DS maker’s business. But the series is colossal. Mario Kart Wii has outsold every other standalone game on the home system, moving a staggering 28 million copies. That’s one game for every three Wii consoles.

Any other publisher would put out one of these every year; Nintendo does one per console and then sells it for half a decade. So the development team generally plays it safe, as is the case with this 3DS installment, to be released on Dec. 4. Now, when Nintendo played it safe with the Wii version, it crafted something amenable to the console’s fan base: a madcap fun-for-all in which anyone including your triplegic maiden aunt Tillie had an equal chance of winning the race. (She and her 28 million friends say I was wrong to dislike it.)

But nowadays Tillie is too busy playing another round of Pissed-Off Parakeets on her iPhone 4S to bother buying a 3DS. So this time, “playing it safe” means embracing the early-adopter hard-core gamers. This has resulted in a Mario Kart more tuned to our sensibilities, which is just as well since Tillie can barely see the 3-D graphics, what with her glaucoma.

The Mario Kart series may appear at first blush to be racing games, but in fact they are a carefully crafted videogame version of Harrison Bergeron. You can’t simply outrace the pack of Mario characters through the 32 different cartoon courses. You have to use items to attack them and defend yourself. The Handicapper General distributes the items, giving lead racers the crappy items (a tiny banana peel that you can drop on the track in hopes that someone will at some point be dumb enough to drive over it) and the racers in the back get shitkicker death cannons.

Here is a typical scenario: You are in a tenuous first place, just barely holding off the guy in second, carefully considering your racing line and drifting corners to edge him out. Suddenly, the last place person accidentally drives into an item box and fires off a Blue Shell, which zooms out to the front of the pack and explodes on you for the crime of doing slightly better than the guy right behind you. You go out in a blaze of glory and second place zooms into first place. The guy who fired the shell? He’s still in last, of course, but he gets to hear you scream some unrepeatable words, and isn’t that fun for everyone? Except you, but who cares about you. 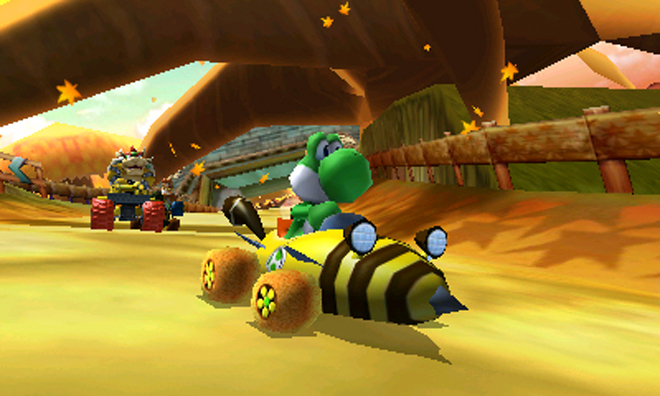 Anyway, the basic formula is still in place in Mario Kart 7 but it’s been toned down considerably. It’s possible, both against the computer racers and against other humans, to get far enough ahead that you can maintain first place after a Blue Shell bombing, which is better than nothing. I’ve still lost a fair few races I should have won (and vice versa), but it all felt a lot more fair.

That’s good because Mario Kart 7‘s pure racing can stand on its own. The controls are tight. The gameplay looks simple but has a lot of depth: You can drag items behind you as shields, tap a button to get a burst of speed every time you catch air on the undulating race tracks, etc. Yes, it feels pretty much exactly like 2005?s Mario Kart DS with better graphics. But it’s still too good to put down.

Mario Kart 7 has online multiplayer, Nintendo-style, which means you can neither speak with or send texts to the people you are racing for fear that you may say something unsanitary. Given the language that I have used in front of Nintendo employees at various game preview events, I am probably the reason for this rule and I do apologize. It still seems a bit like swatting a fly with a sledgehammer.

There are other ways to customize your experience. You can tweak your go-kart’s frame, wheels and glider (used to float down speedily off the courses’ bigger jumps). You can form a “community” of like-minded racers and adjust the game modes and the items that appear, although you can only pick from general categories (“Shells Only,” “No Items,” etc.) rather than individually turn items on and off.

After getting ruined in the Wii game, Battle Mode is mostly back in fighting form for Mario Kart 7. You still zip around a wide-open arena firing weapons at your friends. But while previous games gave each player three hit points and the winner was the last man standing, the Handicapper General has now decreed that everyone must always get to play for the entire match. So players now score points for hitting others, and lose them for taking too many hits. This is actually a good idea, but it would have been better had it been an additional option rather than the only one.

Another arena battle mode, Coin Runners, is also a good idea: The aim is to putter around the battlefield collecting up coins, which can then be extricated forcibly from other players by blowing them up real good. It’s not an original idea (I’m pretty sure I played something similar in Halo: Reach) but it’s a rare breath of fresh air.

Which Mario Kart sometimes seems to be gasping for. In the latest edition of Iwata Asks, the regular series in which Nintendo’s CEO quizzes his employees on the development cycles of their latest games, Mario Kart‘s team is clear that this was not an “it’s done when it’s done” vanity project: This game had to be out in 2011 as part of the company’s all-guns-blazing plan to kickstart the 3DS business. In other words, there was no time to dream too big even if they wanted to.

That said, if a Nintendo with its back to the wall produces games that are more tuned to core gamers’ sensibilities, I’ll take it.

Note: The original version of this story incorrectly stated that the “Coin Runners” mode was newly added to Mario Kart 7. In fact, it appeared in Mario Kart Wii. Wired.com regrets the error.

Read 4033 times
Published in News Technologique-Tech News
More in this category: « Poop-Throwing Chimps Provide Hints of Human Origins Microsoft Battles Google For the Love of Small Business »
back to top