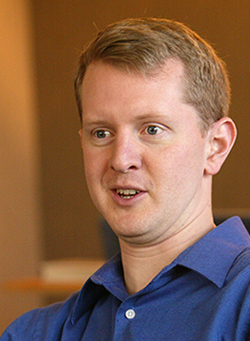 2004: Ken Jennings, the longest-reigning Jeopardy! champion and one of the biggest money winners in game-show history, meets his Waterloo.

Before finally losing to challenger Nancy Zerg, Jennings — a Utah software engineer — won 74 consecutive games, scooped up $2.5 million and became such a household name among Jeopardy! fans that his 2-year-old son, who watched faithfully, began referring to him as “Ken Jennings.”

Jennings, who strove to remain a gracious winner and a nice guy as his streak grew, acknowledged that while intelligence and having a quick hand on the buzzer played a part in his success, his biggest asset was simply a wide reservoir of general knowledge. Still, he wasn’t comparing himself to Einstein.

“It’s related to intelligence,” Jennings told ABC’s Nightline. “To some degree, I think it’s sort of a parlor trick to have all these facts and be able to pull them out at the drop of a hat. It doesn’t make you smart in the same way that Stephen Hawking is smart or some guy researching cures for cancer is smart.”

In some ways, the hardest part of his long run wasn’t winning the games themselves, but maintaining silence from the time the show was taped until it aired. His defeat, for example, was actually taped in early September, almost three months before the Jeopardy! television audience, which grew by 22 percent during Jennings’ run, would see it.

He also had to endure the inevitable pettiness of others that often accompanies conspicuous success, including a broadside from one media pundit who described him as having “the personality of a hall monitor … the guy everyone avoided at the office Christmas party.”

Actually, the critic was wrong. Once Jennings’ coworkers in Salt Lake City learned the reason behind his sudden, unexplained absences, they were completely behind him. According to a grateful Jennings, they began covering their cubicles with “Ken memorabilia.”

Moral of the story? It pays to be smart. Not only did the trivia übergeek walk away with $2.5 million (before taxes, of course) as a result of his remarkable streak, he has since been tapped by companies as diverse as Microsoft and Allstate Insurance for product endorsements. Jennings has also written three books:

Brad Rutter defeated Jennings in the Jeopardy!Ultimate Tournament of Champions in 2005 and surpassed his Jeopardy! dollar total, even though Jennings won additional prize money in various Jeopardy! tournaments. Jennings came in second and Rutter third against IBM’s Watson computer in a two-game match in 2011.