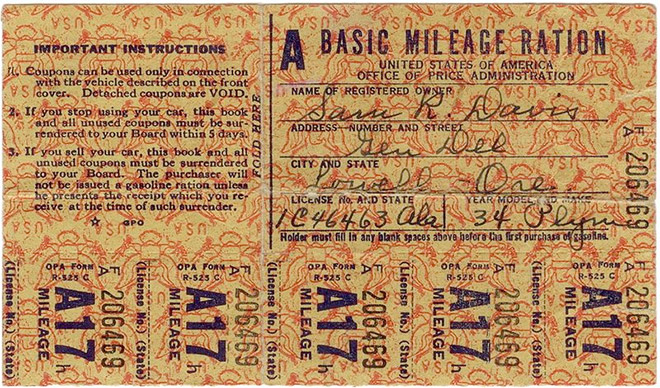 1942: Nearly a year after the Japanese raid on Pearl Harbor that brought the United States fully into World War II, the Americans get around to imposing nationwide gasoline rationing.

A fuel shortage was not the problem. America had plenty of that. What it lacked was rubber. Both the Army and Navy were in desperate need of rubber for the war effort.

Imports had fallen off to a trickle, because many of the traditional sources were now in Japanese hands. The construction of synthetic-rubber factories was just beginning.

Mandatory gasoline rationing had been in effect in the eastern United States since May 1942, but a voluntary program in other parts of the country had proven unsuccessful.

The Baruch Rubber Report, presented to President Franklin Roosevelt on Sept. 1, 1942, concluded that the United States was “a have-not nation” when it came to rubber. Meeting the military’s enormous needs would be nearly impossible if the civilians at home didn’t cut out nonessential driving to conserve on tire wear.

Proving it could remain obstinate even in the face of a national crisis, Congress balked at imposing nationwide gas rationing. Forcing Americans to curtail their driving would be bad for business, many legislators argued. They evidently feared voter backlash more than they did Hitler or Hirohito.

They pushed for a delay at the very least, but FDR would have none of it. Backed by government procurement agencies and military leaders, the president ordered gasoline rationing to begin on Dec. 1 and to last “the duration.”

Americans were presented with FDR’s fait accompli on Nov. 26, giving them less than a week to prepare. The story shared the top of Page 1 in The New York Times, alongside a report of the developing Soviet offensive at Stalingrad.

Thus, Americans soon became acquainted with the ration card, which had to be presented on every trip to the filling station. To be out of ration stamps was to be out of luck.

Drivers who used their cars for work that was deemed essential to the war effort were classified differently and received additional stamps. There were five classifications:

The last three classifications were not subject to the restrictions.

The whining was loudest in the western states, where gasoline was especially plentiful, rationing had come late, and the distances were great.

Read 3786 times
Published in News Technologique-Tech News
More in this category: « [La Start-Up française de la Semaine] : Teleportd Mini-Nukes, Flying 'Terminators,' and 8 More Air Weapons That Will Blow You Away »
back to top