Crack This Code and Become a British Spy 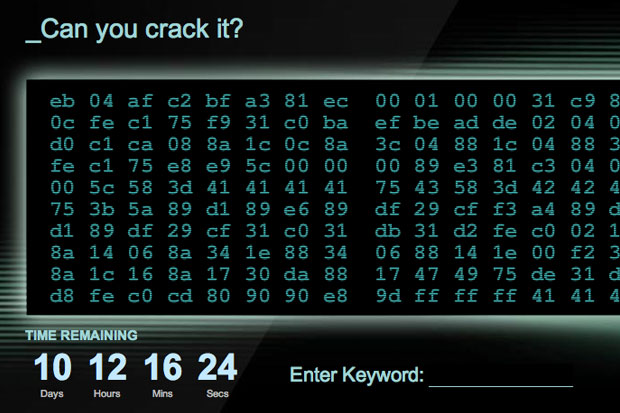 The GCHQ — Britain’s secretive agency of intelligence experts — wants to find new spies. To make sure it has a candidate who’s up to scratch, the agency is inviting hobbyist cryptanalysts to try and break a code online.

A website called “can you crack it” is being spread through a viral campaign around social networks like Twitter and Facebook. The site shows a seemingly-senseless jumble of 160 pairs of numbers and letters, and a box to enter some kind of answer.

Though there are no obvious clues that this is related to the GCHQ and nothing to suggest what will happen if you plop in the right combination of characters, successful code-crackers will be taken to the agency’s site and invited to apply for a job.

The game may be related to the government’s October 2011 response to the intelligence and security committee’s annual report. The report said that the committee is “concerned about GCHQ’s inability to retain a suitable cadre of internet specialists to respond to threats.” In response, the government said that it is “taking a number of proactive steps to address the issue.”

The GCHQ is also being called in to help with growing cybersecurity fears in Britain. In an attempt to make the UK “one of the most secure places in the world to do business,” — according to minister Francis Maude — the agency will market some of its security technologies to private businesses before the end of the year.

This isn’t the first time a British intelligence agency has used a public puzzle to recruit new code-breakers. During World War II, the Government Code and Cypher School placed a letter in the Daily Telegraph, challenging readers to solve a crossword puzzle in under 12 minutes. The ones who did all got interviews to join the spy service.