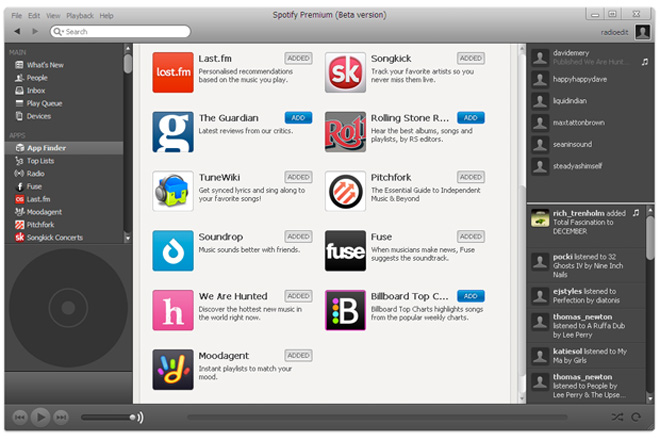 We’ve been playing with Spotify’s new app framework, and we’re impressed. The potential for apps to take advantage of Spotify’s streaming capabilities to deliver some incredible experiences is huge.

The launch lineup is fairly small, but that doesn’t mean that it’s weak. The list of apps already available in the beta version of the client include heavyweights like Last.fm, The Guardian, Songkick and Rolling Stone.

But there are some smaller options too that are just as good. Here are the five Spotify apps that you need in your life.

Machines still aren’t all that great at recommending music. Just because one of your friends listens to two songs next to each other, it doesn’t mean that they’re necessarily alike, let alone equivalently worth listening to.

We Are Hunted dumps all that sentiment and musical-analysis nonsense and focuses instead on what music bloggers, prominent social media figureheads, music messageboards and P2P fanatics are getting excited about.

The Spotify app lets you access up-to-the-moment charts of what the bleeding edge of the music industry is buzzing about, charts of more mainstream artists, and also who’s getting noticed in specific genres. A simple button-click saves those playlists for later listening, even on mobile devices.

If your chosen track isn’t there, or the lyrics aren’t quite right, then you can add or edit them yourself. Having said that, in our experience the database is pretty great, with only a few exceptions — which had Spanish translations of the lyrics instead.

Best of all, the lines are time-coded, and will move past as you’re listening. All you need is to hook up your laptop to your TV and you’ve got the most comprehensive karaoke machine ever, for free.

If you’re living in a big city, it’s often tricky to keep track of when bands that you like are playing nearby. Songkick exists to solve that problem, by scanning your playlists and telling you when those artists are in town.

It’s easy to set up, and only takes a minute to build up a list of which bands you want to track. If there are artists you want to add specifically or — more likely — remove, then you can do that, too.

Then, when you know which ones you want to go to, you can head over to Songkick’s website, register an account and build up a personalized calendar of which ones you’re going to and which you’ve been to in the past, complete with set lists, photos and other media. It’s a shame that stuff isn’t in the Spotify app, but with any luck it’ll be added down the line.

Read 3397 times
Published in News Technologique-Tech News
More in this category: « TouchFire iPad Keyboard Seeks To Put The Touch Back In Typing WikiLeaks Unveils the Selling of Surveillance, Sort Of »
back to top