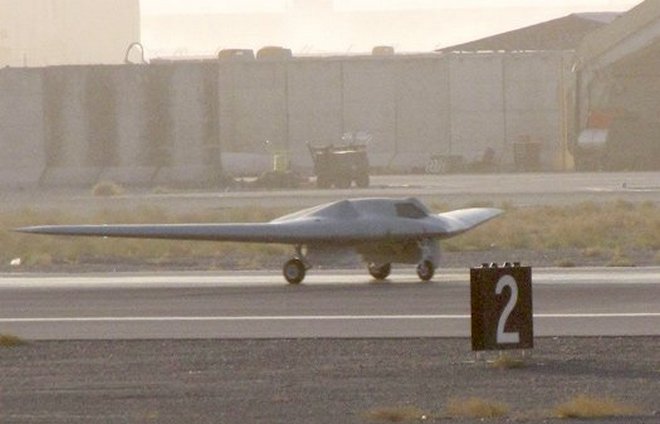 For the second time this year, the Iranian government is claiming it forced down a stealthy U.S. Air Force spy drone. Only this time, Iran says it bagged the RQ-170 “with little damage” by jamming its control signal — a potentially worrying development for American forces heavily reliant on remote-controlled aircraft.

There are good reasons to question Iran’s story — or at least parts of it. For starters, the earlier claim of a drone shoot-down proved false. Why would this announcement be any more credible? Also, for most U.S. unmanned aircraft, merely jamming the control signal won’t bring them down. Some don’t have control signals at all.

The wedge-shaped RQ-170, built in small numbers by Lockheed Martin, was a secret until reporters photographed it at Kandahar Air Field in southern Afghanistan in 2007, as seen above. The Air Force copped to its existence two years later. The RQ-170, nicknamed “Beast of Kandahar” by aviation journalist Bill Sweetman, has since been spotted in South Korea and also played a role in the raid to kill Osama Bin Laden in Pakistan in May.

Analysts says the RQ-170 could scout out Iran’s and North Korea’s nuclear facilities. With the U.S. and Israel threatening to attack Tehran’s nuke sites to prevent the regime from gaining nuclear weapons, reports of RQ-170s flying over Iran should not shock anyone.

Still, the shoot-down claim, published today by the official Islamic Republic News Agency and echoed by Iran’s Press TV, should be taken with a giant grain of salt.

Iran frequently announces it has shot down U.S. surveillance drones, but has not, to our knowledge, produced any evidence of the kills. Even if Tehran did bag itself an American war ‘bot, it might not be an RQ-170. The editors at Press TV undermined their credibility by running  the story with a photo of an entirely different drone than the Beast of Kandahar.

Equally dubious is Iran’s insistence that the RQ-170, if that’s what it is, was forced down largely intact by an Iranian army “electronic-warfare unit.” The implication is that the Iranians somehow jammed the command signal beamed to the drone by remote operators.

That’s a pretty big deal, if true. The Predator and Reaper, America’s most numerous attack and surveillance drones, are remotely-controlled via radio link by a pilot on the ground. If the link is broken, they’re designed to enter a holding pattern or even return home. But these failsafes aren’t perfect, as the Air Force discovered in 2009 when a Reaper drone went haywire and had to be shot down by an F-15. The Air Force and Navy have admitted that the control link represents a critical weakness and have worked hard to make drones more autonomous.

Serious, widespread autonomy is for the next generation of drones. Most of today’s Unmanned Aerial Vehicles can probably be jammed, but before now no one has succeeded in actually doing it — again, if Iran’s claims are true.

But even if Iran did force down an American drone, it’s unlikely it was an RQ-170. The Beast of Kandahar probably navigates autonomously, like Northrop Grumman’s Global Hawk does — in contrast to the less sophisticated, remote-controlled Predators and Reapers. NATO acknowledged losing a UAV in western Afghanistan last week. “The operators of the UAV lost control of the aircraft and had been working to determine its status,” NATO explained in a press release.

That the operators “lost control” indicates the drone in question was not an RQ-170. And NATO losing a robot is not the same as Iran possessing it intact.

Read 4887 times
Published in News Technologique-Tech News
More in this category: « Oracle Says HP Lied to Customers About Itanium Wish List: Our Favorite Celebs Show Us Their Go-To Gear »
back to top