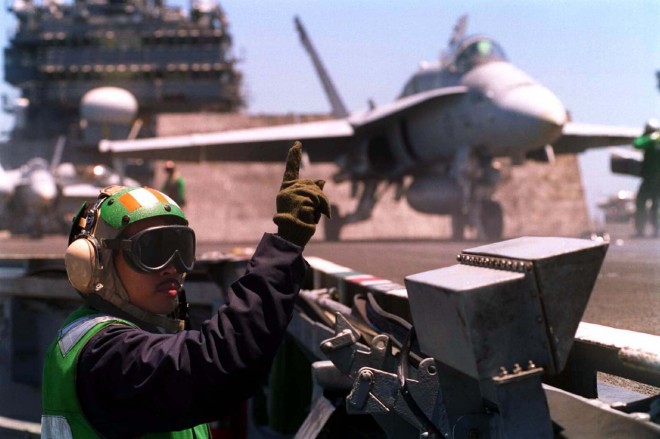 The Navy just signed deals to buy 450,000 gallons of biofuels — arguably the biggest purchase of its kind in U.S. government history. The purchase is a significant step for Navy Secretary Ray Mabus’ plans to transform the service into an energy-efficient fleet. But at approximately $15 per gallon — nearly four times the price of traditional fuel — the new fuels won’t come cheap.

The $12-million purchase, expected for months, will all be used this summer off the coast of Hawaii. There, supersonic F/A-18 jets will launch from the deck of an aircraft carrier, powered by fuels fermented from algae. A 9,000-ton destroyer and a cruiser will join it on a voyage across the Pacific, using fuel made from fats and greases. (The carrier itself runs on nuclear power.) It’ll be the first demonstration of the so-called “Great Green Fleet” — an entire aircraft-carrier strike group relying on alternative energy sources.

If it works, the Green Fleet will not only be poised for a full alt-fuel deployment in 2016. Mabus will be much closer to his promise of obtaining half of the Navy’s fuel from alternative sources by 2020. And the often-struggling biofuels industry will be a lot closer to proving its viability.

“It’s a way to show that this is not a fad, this is not a flavor of the day,” Mabus tells Danger Room. “This is serious. This is real. This is actually going to happen.”

This is hardly the Navy’s — or the military’s — lone effort to find new fuel sources. A Marine company in Afghanistan cut its fuel consumption by up to 90 percent, thanks to portable solar panels and other alt-energy gear. The Navy recently commissioned its first hybrid ship, the amphibious assault ship U.S.S Makin Island. The service is now working to retrofit its destroyers with hybrid drives and mission-planning software that should allow the ships to sail more efficiently.

But biofuels in general — and the Green Fleet demo in particular — are considered tent poles in Mabus’ broader energy strategy. That’s why the Obama administration recently announced that the Navy, along the Departments of Agriculture and Energy, will spend as much as $510 million to develop the country’s biofuel production infrastructure, and to buy up more gas.

Two companies will split the Navy order. Dynamic Fuels, half-owned by agribusiness giant Tyson Foods, converts fats and waste greases into biofuels. Solazyme uses algae as a means of fermenting everything from plant matter to municipal waste into fuel. Both are considered leaders in the next-gen biofuel industry — Dynamic is one of the first companies in the field to have a commercial-scale refinery up-and-running. Solazyme has already delivered 150,000 gallons of its fuels to the Navy.

Substantial hurdles remain, however. The Navy previously paid about $1,000 for each barrel of biofuel it bought to test out in its jets. This new purchase, at first, will cost just as much: $26 per gallon, or $1,092 per barrel. That biofuel will then be blended with an equal amount of fossil fuel, producing 900,000 gallons — and an effective price of about $15 per gallon for that 50/50 blend. It’s “roughly half of what was paid in 2009,” according to Deputy Assistant Secretary of the Navy Tom Hicks, who serves as Mabus’ point man on energy issues.

Mabus notes that this 450,000-gallon buy — while comparatively large for military biofuels — is still tiny compared to the amount of fuel the Navy and the commercial airline industries consume. He’s promised that as the Navy buys more fuel, economies of scale will kick in, and prices will drop. But an MIT study of alternative jet fuels, conducted in association with the Navy, found that even under optimal conditions — with dozens of refineries up and running — the price of bio jet fuel would still be twice as high as the cost of the traditionally made stuff. (That study examined vegetable oil as a biofuel feedstock, and the Navy is a using different process this time around; but many of the same issues still apply, regardless.)

Clearly, the Navy wants to go green, and reap some of the benefits of having a diversified fuel supply. Whether it can afford to do so — well, that’s still an unanswered question.