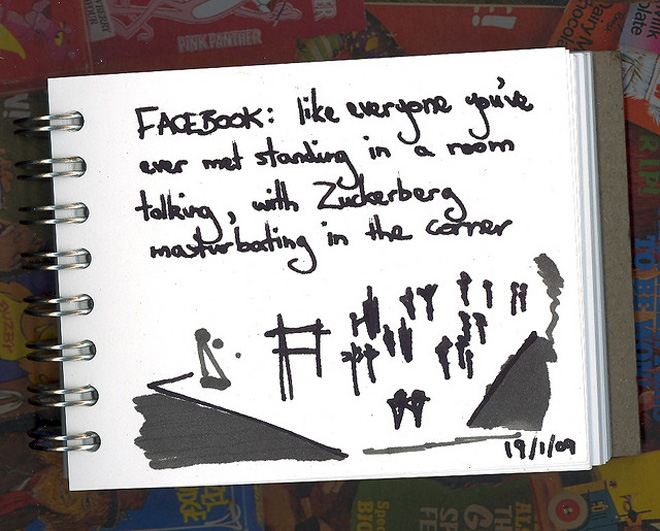 Facebook has settled with the Federal Trade Commission in response to accusations that it ignored user privacy, lied about policies, allowed applications to gain access to personal data, and forced us to consider that “Zuckerberg and the Winklevoss twins” sounds like some guy’s nickname for his genitals.

Facebook CEO Mark Zuckerberg, writing in the official Facebook blog, took full responsibility for denying anything was wrong. He pointed out that most of the egregious violations of policy had been fixed within two years, and reassured users that Facebook’s terrible track record on privacy in no way suggested that the company had a terrible privacy track record.

He also provided a justification for the company’s early missteps.

“Have you seen what people post?” he asked rhetorically. “Look, when someone writes about his post-buffet bowel activity and publishes it in such a way that his entire family, all his friends, most of his old school chums, his boss and many of his co-workers can all read it, I think it’s safe to assume that person isn’t concerned with privacy.

“In fact,” he continued in his totally make-believe post, “as far as I can tell, our users’ main problem was that they weren’t allowed to reveal enough. I mean, if you take a quiz that tells everyone which Desperate Housewife you are, it’s clear you’re desperate to share information, no matter how uninteresting or pointless.

“We looked at pictures that people posted of drunken college parties, pictures which could easily be copied and pasted by anyone on their friends list, pictures which would still be out there when they were applying for their first job and courting their future spouse, and we thought, ‘OK, these people aren’t going to care if we tell advertisers what brands of beer they mention.’

“But no,” he said. “Apparently it’s just fine to tell 400 people you had to drop out of the beer-bong competition because you wanted to get that hummer from Jaynee before she threw up, even though you know your cousin Dante reads your blog and he sees your mom every week at the book club. But if we want to tell an advertiser, ‘Oh, he mentioned he handed Jaynee a Tic Tac brand breath mint candy,’ suddenly it’s like we’re committing murder.”

Zuckerberg also welcomed federal oversight, saying, “I’m sure they’ll do a great job protecting your privacy. Because first, federal oversight fixes everything, right? That’s why there was never any problem with subprime lending and we’re not in a recession.

“Oh,” he continued, “and of course the government has a great track record on privacy. It’s just wonderful. If there’s one entity that you can be sure will never spy on you or keep records on your private activities, it’s good old Uncle Sam. He cares about your privacy so damn much.”

Sources close to Zuckerberg informed Wired.com that he was being sarcastic.

The settlement with the FTC requires Facebook to alert users in advance to any privacy changes, seek community input on policy, and deliver all user posts and information to the Central Privacy Bureau, located in an undisclosed location somewhere deep within the hills of Wyoming, for permanent privacy retention.

Born helpless, nude and unable to provide for himself, Lore Sjöberg overcame these handicaps to become a watchdog, an underdog and a chili dog.

Read 2616 times
Published in News Technologique-Tech News
More in this category: « Apple's Secret Plan to Steal Your Doctor's Heart A Google-a-Day Puzzle for Dec. 5 »
back to top