This post is based on a question I was posed in my “Introduction to Rocks and Minerals” class. Now, mind you, it isn’t a serious question, but when I thought about how to answer it, I realized how completely wrong everybody has been about it. The revelation was so clear I half expected the planet to be destroyed to make way for a bypass. So, before that happens, I thought a blog post might be a great way to explain why.

I’ll start with the answer: Everyone is wrong about how people die when they fall into lava. 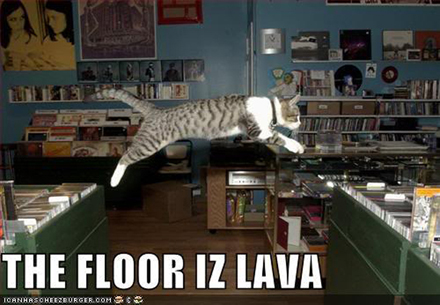 The cat might have the right idea when it comes to falling into lava.

So, what was the question? This (slightly paraphrased): “In that scene from ‘Return of the King’ when Gollum falls into the pit of lava, would he have really just sunk into the lava like that?”

At first, it seemed like an easy question. Well, not so much easy as obvious: yes. However, the more I thought about it, the more I though that pretty much every scene I’ve ever noticed where somebody falls into lava and dies has got to be wrong. Some are just straight out obvious to explain – like in Volcano when the subway maintenance director jumps from the subway car that is being inundated by lava after he saved the unconscious subway driver. The guy jumps from the subway, but not far enough to miss landing in maybe 6 inches of basaltic lava and he proceeds to more or less melt away into the lava like the Wicked Witch of the West. Not likely. Maybe some very severe burns, maybe lost feet (think Darth Vader), but no wholesale melting like that.

However, the death of Golem at the end of Return of the King got me thinking. Golem, if you remember, dove into the lava of Mt. Doom after his previous ring was thrown in – he proceeds to sink into the lava (see below) and leaves the ring floating on the lava until it melts away. Guess what? Sinking into lava just will not happen if you’re a human (or remotely human). You’d need to be a Terminator to sink into molten rock/metal … and here’s why.

My precious. Wait, why I am sinking?

Molten lava is nothing like water. Sure, everyone thinks that liquid rock (magma) is going to behave like any other liquid (e.g., water), but there are some key physical properties that tell us it just isn’t the case. Let’s compare!

Pa*s is the SI unit for viscosity – some people might be familiar with other viscosity measures like poise. Viscosity is, more or less, the resistance to flow, so if you throw something in a liquid, a low viscosity liquid (like water) will “get out the way” and you’ll sink faster relative to a high viscosity liquid (like cold corn syrup). The density of the liquid will also play a role in how quickly you might sink based on your own density. So, when we’re looking at water versus lava, lava is ~3.1 times the density and between ~100,000 to 1,100,000 times the viscosity. They are very different!

Luigi is with the cat on the notion of falling into lava.

Do you suppose throwing yourself into lava would have the same effect as falling into a lake? Probably not. The average human has a density of ~1010 kg/m3, so a little bit more dense than water. That is why we can sometimes float in water and sometimes sink in water. You can control your buoyancy (to an extent) by how much air you hold and whether you choose to swim in fresh water or salt water (which has a density of 1027 kg/m3, so you’re more likely to float). If you are less than one-third the density of basalt (and you are, admit it), it is going to be next to impossible to sink into that liquid.

You can try the experiment at home (without grievous bodily harm). Take your favorite motor oil (I prefer 5W30) at room temperature and fill a small pail. Motor oil at room temperature should have a density of ~920 kg/m3 and viscosity of ~1 Pa-s – this will be your lava. Cut a little fellow out of stryofoam. It has a density of ~300 kg/m3, so it is roughly 1/3 the density of the oil. Now, position your Styroguy on the edge and push him in. Does he sink instantly into the oil? No! So, neither should you in you fall into lava. Now, Stryoguy didn’t get the full effect by then proceeding into bursting into flames, which would be your bonus for falling into lava – remember, most of the red-hot lava pictures in movies like likely basaltic lava at ~1100-1200°C (for comparison, your oven on broil is ~275°C).  However, if you’re already in a position to fall into lava, you had it coming. 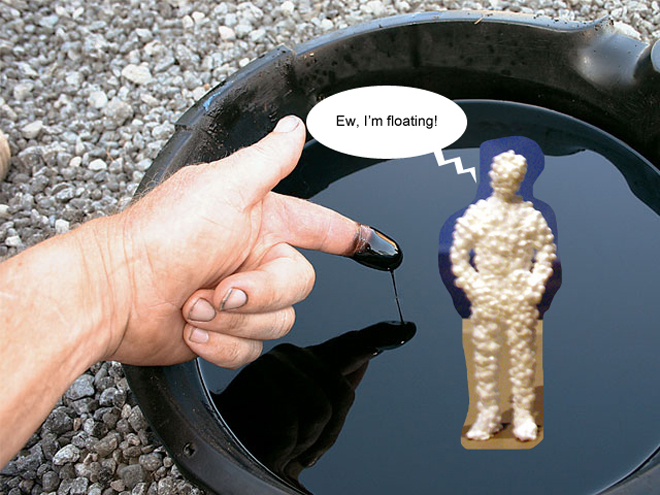 Just like if you fell into lava, Stryoguy floats on oil when you push him in.

So, there you have it. The next time you see someone in a movie fall into a cauldron of roiling lava and they sink into it, remember that it can never happen. The sacrifice of styroguy will be remembered.