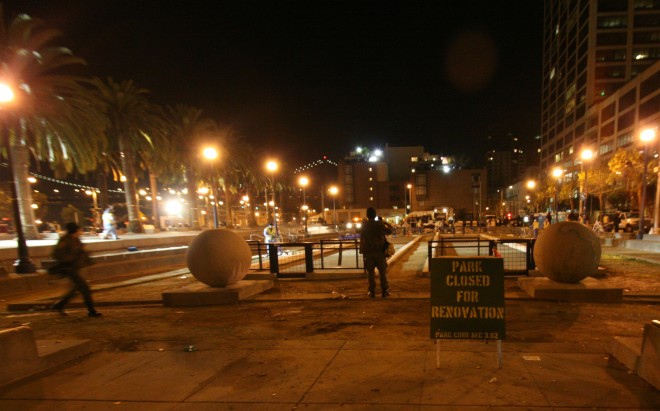 Justin Herman Plaza in San Francisco, closed by the San Francisco Police Department during the eviction of Occupy SF this week.

The Occupy movement’s evictions and conflicts with police go on; Wednesday night, over 100 tents were removed from Occupy SF and 70 arrests made. On Thursday, 38 people laid down in the rain on K Street in Washington, D.C. — lobbyist avenue — to protest money in government.

But the main action right now has moved indoors, specifically to courtrooms, as Occupiers plead free-assembly cases in attempts to legally restrain police and cities from evicting their encampments.

The outcome could make noticeable difference in the America’s landscape, both literally and figuratively.

On one end of the spectrum, defeats for Occupy could mean continual police crackdowns in every major city in America until protesters either give up in defeat or imprisonment — which could either end the movement or force it to become more creative in its tactics in its fight against a system that’s built to increasingly expand the gulf between the rich and poor.

On the other, victory could create constitutionally protected encampments dotting city parks on the national map for months — or even years — should occupying be held as a protected right under the First Amendment’s guarantee of the right to assemble in protest.

Internally, the nascent movement have been debating the legal challenges, wondering if the movement should engage with a system they see as corrupt; the outcome of those discussions and the rulings from various courts will shape how willing this diverse and often rag-tag collective is to compromise and negotiate with the nation’s government agencies.

When the word came that police were evicting protestors from Zuccotti Park – home to the original Occupy Wall Street protest, legal friends of the Occupy movement went to courts in various cities to make sure a surprise eviction wouldn’t happen to other encampments. Most notably Occupy Boston got a restraining order that barred the city from moving in on them– until today, when Judge Frances McIntyre ruled against the Occupy’s request for an injunction, and vacated their protective restraining order.