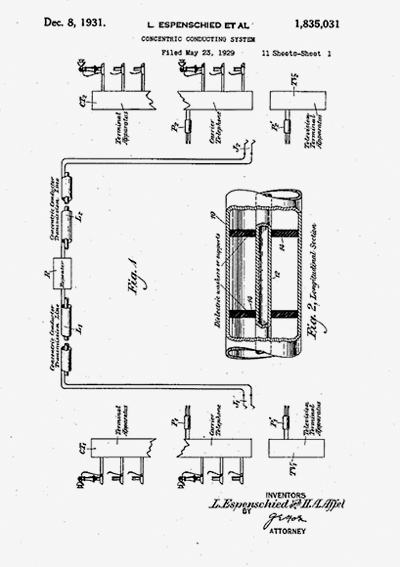 1931: The new invention of the coaxial cable is issued a U.S. patent, which will eventually deliver the gift of ubiquitous telephony and cable television.

How do you minimize signal interference for telecommunication? Easy: Take a wire that acts as an inner conductor and wrap an outer conductor around it, instead of running two wires side by side. That way, the electromagnetic field carrying the signal will only travel in the space between the inner and outer conductors. That will allow wider frequency range, too.

That invention — known today as the coaxial cable, because the two conductors share the same axis — wasn’t realized in the United States until 1931. Experiments with co-ax cables took place in Bell Laboratories for possible telephone usage. Each cable route, consisting of several individual cables, could carry 1,800 calls.

U.S. Patent No. 1,835,031 for a “concentric conducting system” was awarded to Lloyd Espenschied of Kew Gardens, New York, and Herman A. Affel of Ridgewood, New Jersey, and assigned to the American Telephone & Telegraph Co.

Coaxial cable technology improved over time to increase capacity. By the 1970s, systems could support up to 132,000 conversations.

Coaxial cables and amplifiers also led to the creation of the first trans-Atlantic telephone cable in 1956. The implementation of TAT-1, a transatlantic system bridging AT&T with the British Post Office, was “a stupendous pioneering undertaking. Some 4,500 miles of coaxial cable had to be made to the most exacting specifications ever devised, and new machinery had to be designed for laying the cables in waters up to 2.5 miles deep,” according to the book Shaping American Telecommunications: A History of Technology, Policy and Economics.

The co-ax eventually contributed to the growth of community antenna television, or CATV — a large antenna that would share its signal with many individual homes through coaxial cables. And that led to programming created exclusively for cable subscribers, creating a multibillion-dollar industry.

And, as long as we’ve got all those low-interference cables running into millions of homes, why not use them for broadband internet access? Not a bad idea.

As a matter of fact why not run the video through the internet?

All of it based on the simple idea of running a wire wrapped around another wire.

Image: Lloyd Espenschied and Herman A. Affel submitted this drawing with their patent application for a “concentric conducting system,” later known as coaxial cable.

Read 3745 times
Published in News Technologique-Tech News
More in this category: « Putting Scientists on Mars in Permanent Colonies US Swim Team Gets High-Tech Swimwear »
back to top