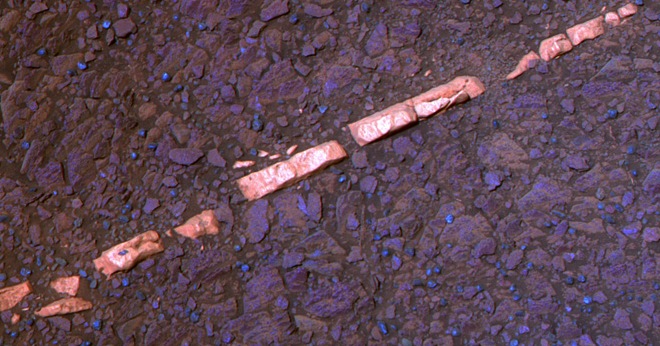 NASA’s Opportunity rover has seen a mineral on Mars that could only have formed in the presence of liquid water.

“This is the single most powerful piece of evidence that water once flowed on Mars that has been discovered,” said planetary scientist Steve Squyres of Cornell University during a briefing at the 2011 American Geophysical Union meeting on Dec. 7. “There’s no ambiguity about this.”

Researchers have found a bright vein of gypsum, a mineral that could only have been deposited by water. The finding suggests that billions of years ago warm water flowed through underground fractures in the rocks.

The gypsum vein — which scientists spotted last month and nicknamed “Homestake” — is approximately the width of a human thumb and about 16 to 20 inches long. It was spotted along the rim of Endeavor Crater, where Opportunity is currently roving, in a ridge named Cape York.

“As soon as we got to Cape York, it felt as if we moved into fundamentally new geological terrain,” said Squyers. “It was something we had never seen before.”

Many of the previous minerals cited as evidence for water on Mars could also have origins that didn’t require water. And one of the previously discovered minerals, known as Jarosite, could have only formed in highly acidic water. The new finding, as well as satellite data suggesting the presence of clays in Endeavor, would favor a source of water that is much more neutral, which might have been more favorable to life on ancient Mars.

Read 2970 times
Published in News Technologique-Tech News
More in this category: « Inside the Strange Science of Cord Blood Banking Art.sy's 'Genome' Predicts What Paintings You Will Like »
back to top