16,000 Eyes: The Vision of a Cambrian Superpredator 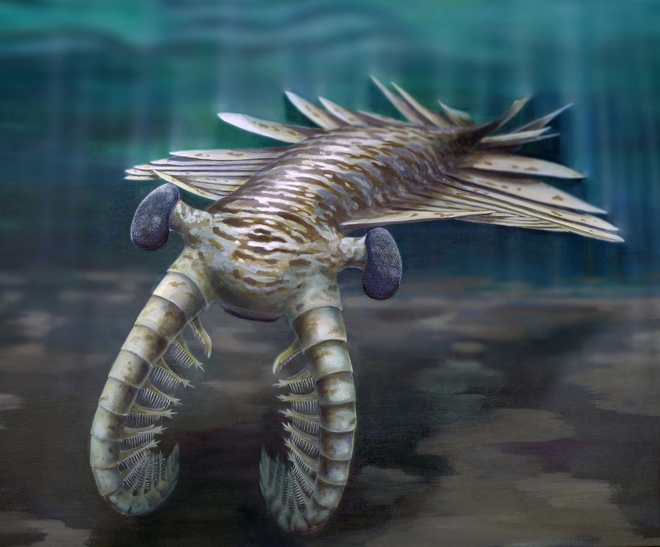 Those of you who get a bit weirded out by spiders and other arthropods would probably have a coronary if an Anomalocaris were to swim in your direction. The animals were about a meter long, and shaped as a flattened oval, a bit like a modern flounder. That’s about the only similarity with a fish, though. Instead of fins, the Anomalocarids propelled themselves through the water using a series of elongated paddle-like structures running down both edges of the body. In front, a pair of appendages could shovel prey into a circular mouth located on its underside.

And then there were the large, bulging eyes, springing from each side of the animal’s head. Until now, we could only guess at what the eyes looked like, but some spectacular, 515 million-year-old fossils from Australia have now shown that they had a huge number of small lenses, arranged much like those in modern insects and other arthropods. The finding suggests that the compound eyes evolved right at the origin of this branch of the evolutionary tree, long before the sorts of hard exoskeletons we now consider typical of arthropods.

First, the fossils themselves, which are absolutely spectacular. We’ve discovered a number of different Anomalocarid species in fossil deposits around the globe but, at best, these simply left behind an impression of the eyes. So, we knew they were roughly pear-shaped and where they appeared on the animal, but nothing about their internal structure. The eyes found in the new fossils clearly show details of the internal structure. They aren’t actually attached to an Anomalocaris, but they match the impressions previously found with them, and we’ve not found anything else in these fossil beds big enough to support an eye of this size.

It takes a microscope to see them, but individual lenses were preserved in each eye. For someone who has seen countless images of the compound eyes of Drosophila, they are startling in how modern they look. Based on their density, the authors estimate that each eye housed 16,000 individual lenses, the most that have ever been seen on any animal we know about. Based on the curve of the eye and what we know about modern compound eyes, they suggest that the animal had very good visual acuity.

Those findings feed into a number of evolutionary arguments. For one, a number of researchers suggested that Anomalocarids were the apex predators of the Cambrian seas, able to shove many of the smaller creatures into their circular jaws—in fact, a number of fossils of smaller creatures have been discovered that appear to bear bite marks from an Anomalocarid. The visual capabilities suggested by these fossils supports the idea that these animals were hunters, using their visual system to spot prey.

The clear similarities between the visual system of the Anomalocarids and modern arthropods also strengthens previous indications of a close relationship between these groups. Previous phylogenetic trees place Anomalocarids as branching off earlier than the origin of all modern arthropods, and near the base of an entire phylogenetic group that includes extinct species and modern arthropods. Confirming that these animals had modern-looking compound eyes pushes the origin of those eyes back to near the base of the group, and suggests the possibility that the evolution of this mode of vision may be one of their defining features.

The final argument made by the authors is in support of an idea that’s been around for decades: the proliferation of new phylogenetic groups in the Cambrian came about in part because the first large predators drove an evolutionary arms race that led to new forms of protection (shells and hard plates) and new modes of motion. The presence of a meter-long predator with excellent vision, in the authors opinion, certainly fits in nicely with the idea of an extremely competitive environment.

Image: This Cambrian predator was about a meter long. (Katrina Kenny/University of Adelaide)