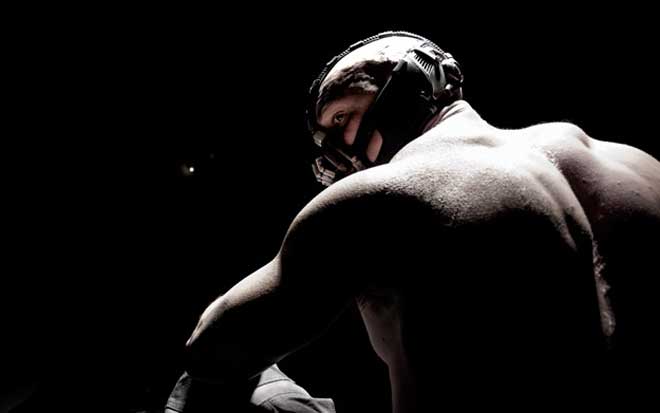 HOLLYWOOD — Heath Ledger’s Joker blasted through the opening heist sequence of The Dark Knight with chilling conviction three years ago. Smart, scary and utterly riveting, Ledger set the tone for the rest of the picture by blending ice-cold humor with utterly remorseless criminal smarts.

“I first saw Tom Hardy on an airplane in Guy Ritchie’s RocknRolla,” Nolan told Wired.com in a chat following the screening of The Dark Knight Rises‘ powerful pre-credit prologue. “He can do anything he sets his mind to.”

If anybody stands a chance to sustain Joker-level ferocity, it’s Hardy. In Ritchie’s 2008 Brit gangster film that persuaded Nolan to cast Hardy as nervy dream-invader Eames in Inception, the 34-year-old actor played cockney thug Brutally Handsome Bob. That same year, Hardy ripped up the screen playing a devilish criminal locked up for years in solitary confinement in psychopath biopic Bronson (clip embedded below).

To get into character as brilliant, hulking badass Bane, a character introduced by DC Comics in 1993, Hardy gained about 30 pounds.

As Bane, Hardy brings a sense of menace similar to Ledger’s Joker, at least as seen in Nolan’s brief opener. Hardy utters guttural commands from behind a piece of perverse head gear that looks like a cross between a mousetrap and a catcher’s mask. It’s a hell of a lot scarier on the big Imax screen than it appeared in stills and video grabbed by paparazzi during filming, or even in official images released by Warner Bros. Pictures.

Besides establishing Bane’s bona fides as a bastardly mastermind, the Dark Knight Rises prologue, which will be shown ahead of Imax screenings of Mission: Impossible — Ghost Protocol beginning next week, serves to hype the jumbo-screen format that Nolan has long championed, with Bat-fans itching to get their first real glimpse of the final installment of the director’s gritty trilogy.

“We’ve shot quite a lot of the film using Imax, which is far and away the best image format ever created,” Nolan told about 200 viewers during his introduction to the sequence Thursday night at Universal City’s AMC Imax. “We want fans to understand why it’s worth seeing The Dark Knight Rises in Imax and we hope these [Imax preview] engagements will get at the grandeur that I think is being gradually chipped away at.”

Nolan noted that further inquiries about The Dark Knight Rises particulars would be moot at this point.

“I’ve barely started to edit the rest of the film,” he said.