How to Spot a Moon Around an Exoplanet 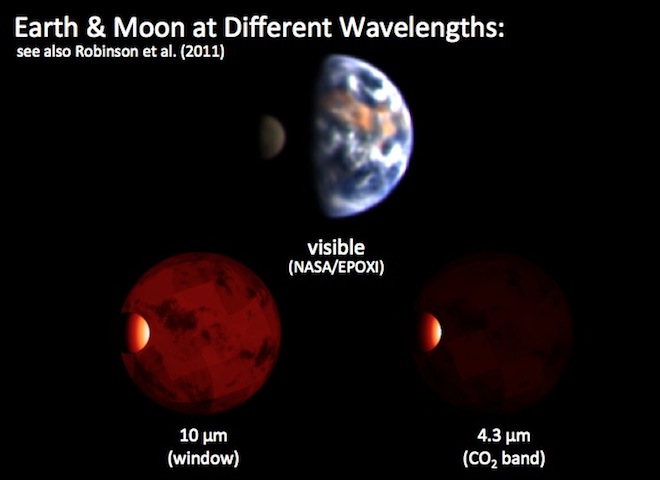 SAN FRANCISCO — As researchers get ever closer to finding an Earth-like exoplanet, some scientists are starting to think about how to spot smaller things, like exomoons.

Most current probes, such as NASA’s Kepler telescope, are confined to indirectly observing extrasolar planets, divining their presence from small decreases in light as they pass in front of their parent star. But future missions will be able to directly image planets circling around other stars, perhaps producing the exoplanetary equivalent of the famous Pale Blue Dot photo taken by the Voyager 1 spacecraft.

As a side project, astronomy graduate student Tyler Robinson of the University of Washington got to wondering if such next-generation telescopes would be able to spot moons around an exoplanet.

If astronomers were looking at the Earth-moon system from a distance in relatively long infrared wavelengths (10 micrometers, seen in the above simulated image at the lower left), they would see light coming from both bodies.

But at slightly shorter wavelengths (4.3 micrometers), where carbon dioxide strongly absorbs light, the Earth – whose atmosphere is full of carbon dioxide – would disappear, while the airless moon would keep glowing brightly.

“At this wavelength, our tiny moon (relative to Earth) actually outshines Earth!” wrote Robinson, who presented his findings Dec. 6, here at the American Geophysical Union meeting.

Why would researchers care if a distant extrasolar planet had a moon? Well, the moon has done a lot for our home planet: stabilizing its axial tilt, creating ocean tides, and slowing down its daily rotation, which has probably led to a less turbulent atmosphere. All of these have been beneficial to the development of life.

So we might not be able to call an exoplanet might “Earth’s twin” until we find a moon in orbit around it.