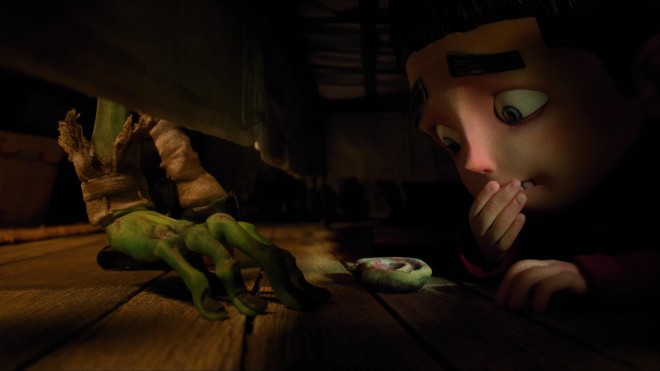 Norman hides from a zombie in this new still from ParaNorman.
Image courtesy Laika and Focus Features (click to enlarge)

ParaNorman’s unlikely hero cowers underneath a bed as a zombie gets dangerously close, in this new still from the upcoming comedy-thriller, provided exclusively to Wired.com.

“Norman is looking on in terror as the zombie tries to find his lost ear,” says Travis Knight, ParaNorman’s lead animator and president/CEO of? Laika, the studio making the movie. “The image is evocative of the tone of the film.”

??In ParaNorman — which follows Laika’s first stop-motion animation feature, 2009’s stunning, Academy Award-nominated Coraline — a small town is under a curse, and under siege by zombies.

The town’s only chance for survival rests with a misunderstood boy named Norman (voiced by Kodi? Smit-McPhee) who can talk to the dead. And the undead. But Norman isn’t just up against zombies; he must face ghosts and witches, not to mention a whole lot of grown-ups.

??ParaNorman opens next? August, but this tantalizing new image and the movie’s awesome first trailer (below) have us counting the minutes.