For eight weeks, two groups of students in Los Angeles and Montreal worked together to help a tiny plush robot named Laika reach her spaceship as part of Robot Heart Stories. A team of photographers documented the robot’s journey, fueled by the students’ creative output.

By Mildred I Lewis, originally posted at ARGNet 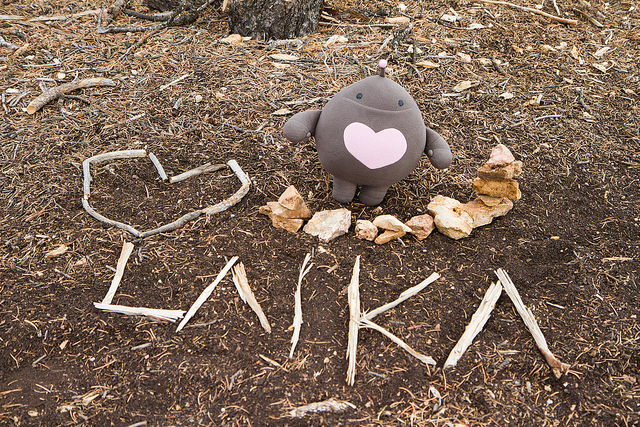 Lance Weiler’s most recent project began with a simple yet provocative question: can a robot reboot education? To answer that question, Weiler collaborated with fellow Workbook Project contributor Janine Saunders in creating Robot Heart Stories with a team of more than 50 creative professionals.

For the project, students in a Los Angeles elementary school class and a Montreal media workshop teamed up to send Laika, a small female robot scientist, from Canada to California. As a team of award-winning photographers drove the robot across country, the 42 students fueled Laika’s journey with stories, videos and letters. Photographers and other artists brought the children’s work to life and, in turn, uploaded their work to the website.

While this ambitious project focused on the two groups of students, aspects of the campaign were open to the world. Anyone could create a heartpack, origami robots that could be painted, colored or photographed in different settings. Those images were also uploaded to the Robot Heart Stories website. Other classes used the project for experiential learning projects. This collaboration had virtual and real world implications. The website notes that “everything you submit helps the robot’s heart meter reach full strength, AND it helps raise money for underpriveledged [sic] students.”

This first phase of the project began on October 17 and concluded on October 31, overlapping with Open Access Week. The project is the first of an anticipated trilogy from Weiler and Saunders, who plan to compile the experience in a book. The project will end with Laika travelling on a NASA-sponsored rocket to the International Space Station. One of the most engaging aspects of the project was its lyricism and randomness. There are haunting photos of Laika suspended over desert sands, visiting the Alamosa Solar Project, leaping over a gas pump, and swimming in Parry Sound. The project traveled to well known places such as Los Angeles, Montreal, and the Grand anyon but also made stops in unusual locations like Wausau, Wisconsin and Parry Sound, Ontario.  It also produced a much wider range of topics and tonalities that, in turn, drove student creativity.

The initial observations of the students were typical. An early letter from the LA class reads: “One thing is we eat food like tacos, pasta, bread, soup, and steak. Do you consume oil? We don’t drink oil over here! What do you like to do for fun?” Things quickly evolved as project photographers drove Laika from Canada to the U.S. The students started taking ownership of the project. Shortly after naming the robot Laika, they started integrating their studies into the project. The Los Angeles students gave Laika advice about sustainable energy, while the Montreal group made a series of videos, beginning with Laika’s Song, a Monty Python inspired animation. Their content pushed by the structure created by the producers soon incorporated mythological, whimsical and spiritual elements.

The project could become something of a model for educational transmedia projects. Completed on a shoestring budget, it utilized the expertise of nonprofit partners like the Fondation du Dr. Julien and Story Partners along with the resources of ad agencies Northern Army and Vectorface. Including whimsy along with the tactile elements elevated Robot Heart Stories beyond many of its peers in the educational space, which often feel either like an extension of educational software or like video games. The project visited 56 cities, traveled 2010 miles, and generated 397 photographcs, exposing the participants to critical thinking skills and structured creativity that the students will need to be successful. And while the opportunities for collaboration presented by Robot Heart Stories may have seemed daunting at first, it provided a much-needed introduction to experiencing stories as engaged contributors as opposed to passive consumers.