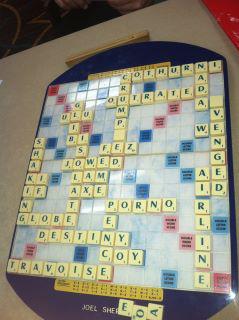 It’s the Scrabble equivalent of the four-minute mile: Mark Landsberg’s tournament score of 770, set at a 1993 tournament in Eagle Rock, Calif. For 18 years, no one came close to the mark in the pressure cooker of a tournament game, where top-ranked players face only solid competition. In recent years, a couple of club players topped the mark, leading Scrabble watchers to believe it could be broken in a tournament game someday.

That day came on Friday at the Northeast Scrabble Tournament in Stamford, Conn. Landsberg’s record became a footnote, as former world champion Joel Sherman scored a staggering 803 points. In a first round game, Sherman defeated Bradley Robbins by an eye-popping 518 points, on his way to going 7-0 in the first seven games. This was no walkover; Robbins is a former National School Scrabble Champion.

The 49-year-old Scrabble pro from the Bronx is well known in wordplay circles; he was a key figure in Steven Fatsis’s bestseller Word Freak, nicknamed “G.I. Joel” because of his gastrointestinal issues. In Friday’s game, Sherman scored a North American Scrabble Players Association-record seven bingos (plays where all seven tiles are used): CRUMPLED, OUTRATED, AVENGED, AIRLINE, SHAKING, TRAVOISE, and COTHURNI, which the Official Scrabble Players Dictionary defines as “buskins worn by ancient Roman actors.” Four of those bingos were consecutive, on turns 2-5.

But Sherman’s score was only the first highlight of the weekend. By Sunday, an entirely different story had overtaken the tournament. After his 7-0 start, Sherman suddenly started losing, finishing the tournament 12-4. He was quickly lapped by Mack Meller, who won the tournament with a 13-2-1 record.

By far the youngest tournament winner ever, the homeschooled Bedford, N.Y., resident became the youngest Scrabble expert (defined as having a ranking of 1700 or better) in history in June. Meller donates a portion of his tournament winnings to St. Jude’s Hospital.

On the other side of the ledger, there’s Sherman’s opinion on his record-setting game: “It’s nice, but it’s not worth any money,” he told the Stamford Advocate. “I already have plenty of notoriety. I’d rather do something that pays off.”