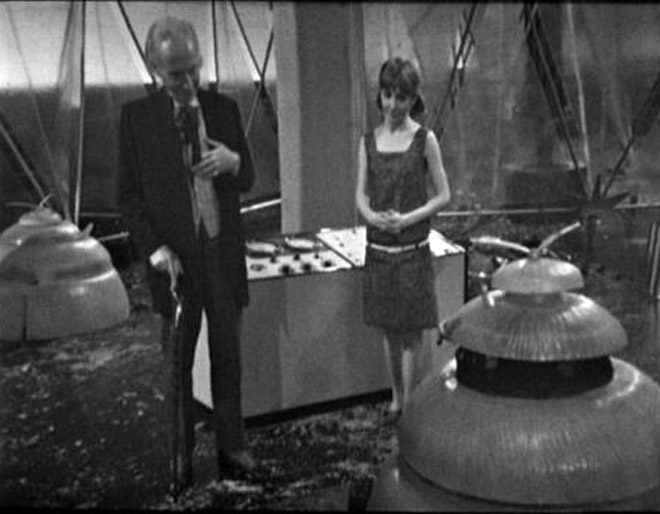 Copies of two Doctor Who episodes from the 1960s that were presumed lost forever were found recently in the library of a private collector.

Terry Burnett, a former television engineer, bought recordings of the episodes in the 1980s at a school festival in Hampshire, England. Both episodes were segments from four-part stories: “Air Lock” was the third installment in 1965’s Galaxy 4; the second recovered episode was “Episode 2? of 1967’s The Underwater Menace.

Burnett wasn’t aware the episodes were missing, but their recovery became a major announcement Sunday within the Doctor Who universe as the British Film Institute showcased the newly discovered footage during the Missing Believed Wiped event.

Ralph Montagu, Radio Times‘ head of heritage, described a pivotal conversation with Burnett, who mentioned that he thought he had an old episode of the BBC’s sci-fi show squirreled away somewhere.

“I thought it was bound to be something we’ve got already,” Montagu told Radio Times. “I tried not to get too excited, but he came back the next day and brought this spool with him. It had no label, so I had a look at the film leader and it said ‘Air Lock.’ I thought, What’s that?’ I checked online and saw that ‘Air Lock’ was an episode of ‘Galaxy 4? — a missing Hartnell serial. So then I got very excited.”

The chance discovery is just the latest vintage Doctor Who to surface. More than 100 episodes remain missing, a result of the original videotapes having been wiped or destroyed.

He might as well have been predicting the future.

While the two episodes from Burnett’s collection are in relatively good condition, Radio Times reports that the footage suffers from problems including a film break, a “tramline” scratch, a snippet lost to censors and other deficits.

Still, they help fill gaps in the longest-running sci-fi show in history.

The episodes star William Hartnell and Patrick Troughton, the first two actors to play The Doctor. In the episode from Galaxy 4, the Drahvins, a race of cloned females, attempt to escape an exploding planet. That episode is the only time in the long-running sci-fi series that tiny robots known as the Chumblies appear.

In The Underwater Menace story arc, which introduced the Fish People, a mad scientist tries restoring Atlantis by draining the ocean.

The BBC reports that 106 installments from 1964 to 1969 remain missing. While these two may not be the most lusted-for from the lost collection, any Doctor Who find at this point is reason enough to hug your nearest Tardis.

You can see stills and video clips from the recovered episodes on the BBC’s website.

Read 2601 times
Published in News Technologique-Tech News
More in this category: « World's Smallest Steam Engine Is Size of Fog Droplet Downhill Mountain Bike Is a One-Way Ticket to Funtown »
back to top