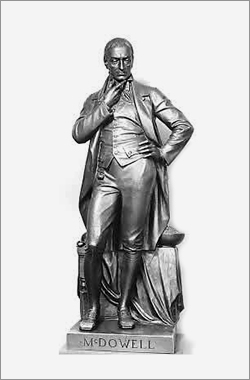 1809: Dr. Ephraim McDowell, a pioneer in abdominal surgery, examines his patient and makes the decision to attempt the first surgical removal of an ovarian tumor, earning him the sobriquet “Father of Ovariotomy.”

The 45-year-old patient, Jane Todd Crawford, had been misdiagnosed as being pregnant with twins. McDowell, who ran a surgical practice in Danville, Kentucky, offered a different diagnosis — a large ovarian tumor. He decided to risk the previously untried surgery and set Christmas Day for the operation.

A reader today can only imagine Crawford’s agony. McDowell, working without anesthetics or antibiotics, which were then unavailable, removed a 22-pound benign tumor. Crawford’s suffering was rewarded, however: She made a complete recovery and lived until the ripe old age of 78.

McDowell’s account of the operation, published in 1817, created a sensation in the medical world. He went on to perform eight more ovariotomies. Another notch in McDowell’s distinguished medical bedpost occurred when he operated on future President James Polk, then a member of the Tennessee legislature, removing a gallstone and repairing a hernia.

Ironically, McDowell the abdominal expert died of a burst appendix in 1830. He was 58.

Photo: This bronze statue of Ephraim McDowell is part of the National Statuary Hall Collection located in the U.S. Capitol complex. The statue was given by the state of Kentucky to honor McDowell’s medical and surgical achievements. / McDowell House Museum