I am happy to introduce a guest blog from Steen Andersen of Copenhagen Suborbitals. This post is his work and words: 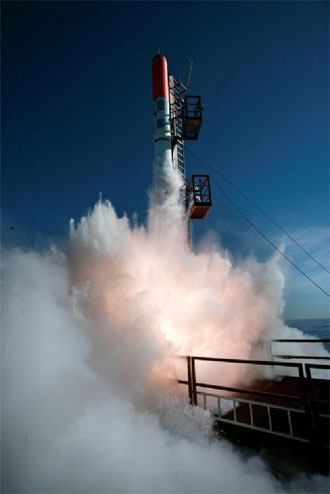 We are using a variety of different cameras to document our static ground test of the rocket motors as well as actual launches of the space capsules. Performing a ground test makes it relative simple to place cameras of high quality at suitable places in order to document the motor test. But in case one wants to mount cameras outside a space capsule doing speeds above Mach 1, it’s another challenge.

If a camera wants to have a shot at being used on our space vehicles, it must be able to comply with the following requirements (among others, but these are the most important):

Not to mention that they must be in a price range where CS have a change of playing along. 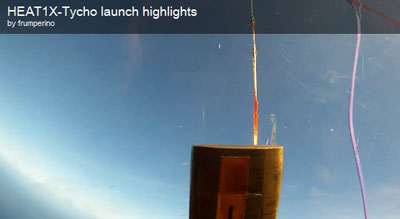 This is a still image from the helmet-mounted camera on the crash test dummy onboard the spacecraft during the flight of HEAT 1X. The image shows a radar tracing beacon as well as the parachute lines after deployment of the chutes. Image: CS

GoPro cameras, which are used in all different outdoor activities such as skiing, para-gliding and motor-sport, is one possible choice. Their rugged design and simple user interface makes them suitable for documenting this sort of activity. What they don’t have in manual adjusted settings, zooming etc., they make up in simplicity, toughness, easy mounting possibilities and a reasonable image quality. Therefore Tycho Deep Space will be equipped with a number of GoPro cameras. We’ll be controlling the cameras using the Hero BusTM. Now, don’t imaging a large vehicle with your favorite cartoon characters in tight outfits ready to save your mission if anything goes wrong. No, it’s just another word for the external electrical interface which can be accessed via the plug at the rear of the camera.

As we are not in the business of inventing the wheel one more time, we asked Mr. Google if anyone has had the same idea and possibly been kind enough to share it with the rest of the world. It quickly turned out that both wishes where granted at a GoPro user forum. We found the following pin-out for the external interface suited our needs perfectly: 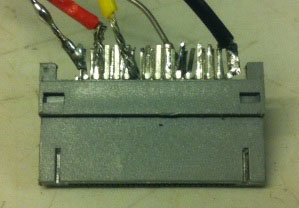 That’s it? Not quite, because we had to solder on a 30-pin plug, which is hazard.  And we need the casing to fit around the camera. Either we’ll be using a special back door for the GoPro, or we’ll adapt the current casing for our needs. The plug needs some space and we still need the casing to be waterproof and not obstructing the easy access to the camera’s SD card.

But when the casing is done, we have the fun part left of deciding where to install the cameras on Tycho Deep Space and other rockets we hope to launch during our 2012 campaign at the Baltic Sea. Hopefully, we’ll be able to document the flights from a lot of different angles, for instance pointing downward during the blast-off and from the parachutes pointing downward to the ground seeing the spaceships hanging on the chutes. 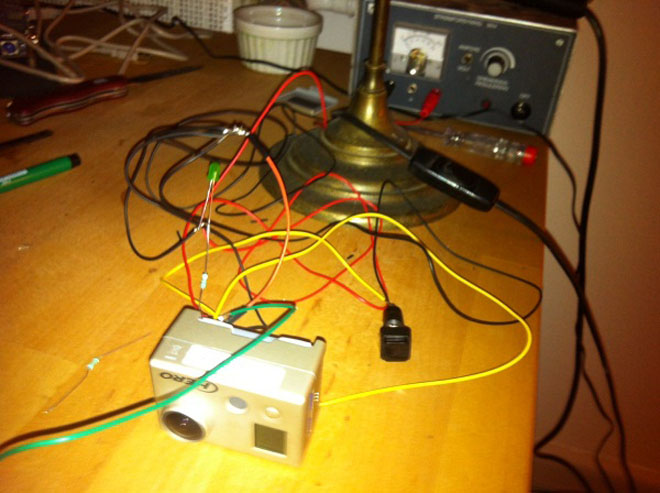 A prototype of our GoPro remote control or an electronic bird’s nest? Well, work needs to be done. Image: Steen Andersen

Here’s a couple of links with information on the pin-out of the Hero Bus TM:

Steen Andersen joined Copenhagen Suborbitals in 2009. He is responsible for the mission control software called FIDO monitor, taking part in test measurements and the ongoing research and development. He has previously been working with software development for a Danish space company and is currently making a living as an IT consultant.

Read 4628 times
Published in News Technologique-Tech News
More in this category: « New Armed Stealth Drone Heads to Afghanistan (And Maybe Iran, Too) See the Hideous Faces of Fallout in The Divide »
back to top