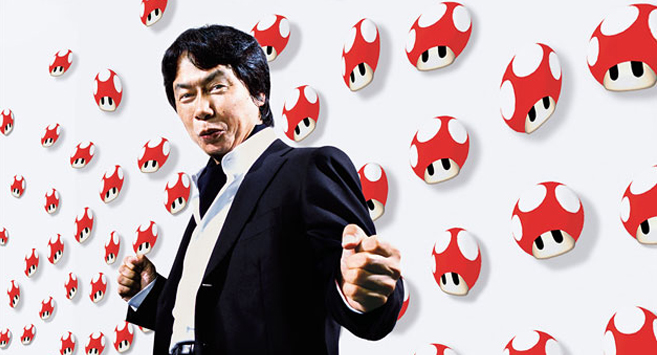 REDWOOD CITY, Calif. — The creator of Super Mario Bros. has big plans for Nintendo’s future … and very small plans for his own.

Shigeru Miyamoto, the head of Nintendo’s game design efforts, sat down with Wired last week to discuss how the company plans to win more fans to its Nintendo 3DS handheld, the remarkable collaboration between developers in Kyoto and Texas that created Mario Kart 7, and another blockbuster franchise that he thinks would be a good fit for East-West cooperation.

But it was Miyamoto’s final comments from this interview, which took place at Nintendo’s Redwood City offices last Wednesday, that caused a stir when we previewed this interview last week. The veteran designer and head of Nintendo’s Entertainment Analysis and Development said that he would be stepping back from his current direct involvement with the company’s massive franchise titles to concentrate on smaller, more personal projects, beginning next year.

Nintendo of America sought to put that disclosure in perspective, emphasizing in a statement that Miyamoto is not leaving the company. “He jokingly mentions retirement to motivate his staff to excel,” the company said. “His ability to focus on smaller projects reflects the confidence he has in all of Nintendo’s development teams … Mr. Miyamoto will continue to provide oversight to those teams and get deeply involved in projects when the situation warrants, ensuring that the quality of Nintendo projects is maintained at a high level. But he will also be able to explore new innovations on his own and in smaller design groups.”

The full interview with Miyamoto follows.

Wired.com: When we last left off, we were at the roundtable at E3. And my question then was, Why are we not seeing more games on 3DS for the casual audience? Nintendogs came out, but I expected more things like Brain Age and going after the wide audience. And your response was, you’re pursuing core gamers. So I wanted to start there — do you see this as a strategy shift, going after core gamers again? Do you feel like you were neglecting them in the past and want to bring them back into the fold? What is the reason for pursuing hard-core gamers right now with 3DS?

Shigeru Miyamoto: Of course, I have my own limits as to how much game software I can take care of at any one time. But when it comes to the time when we were developing mainly software for the Nintendo DS, my concern was, as you pointed out, looking beyond the existing videogames then — in other words, how we could expand the definition of videogames. But when we started working on the Nintendo 3DS, inside myself there was a kind of shift in terms of priority. That is, I wanted to see how games can be changed when they are running on the Nintendo 3DS. When I say “the games,” [I mean] every kind of game including the series of videogames which were available in the past.

Applying that to the Wii, I wanted to see how the Wii MotionPlus could change the gameplay even when it’s applied to existing gameplay.

So, of course Nintendo’s main strategy has been the expanding of the gaming population. By that, what we are actually doing from the developer’s side is we are trying to expand the potential of videogames. To some extent, of course, we’ve been able to do that, and now, people are sometimes talking about the element of smartphones and how Nintendo’s market share might be eroded by the element of smartphones. But I do not think that we are directly competing against each other.

However, when we look at how we have expanded the gaming population and how we have expanded the definition of videogames, some of that might be actually done by smartphones. When it comes to some portion of the population that we have expanded, smartphones might be able to provide some entertainment as well. So looking at the situation just like that, rather than simply trying to expand the definition of videogames in the same way as we used to do with Nintendo DS, I think, why don’t we look at the gaming population from a different perspective?

“I do not think that we are directly competing against [smartphones].”

More specifically: For example, there have got to be a number of people who used to play videogames but who are now, even temporarily, quitting from videogames. And why don’t we approach, for example, more female audiences? In order to approach those people who are taking a break, or those female customers, it so happens that applying the game mechanisms that we used to make in the 3-D world of the Nintendo 3DS might be a good idea. And actually we’ll be able to leverage upon our own ability to make … game know-how, the know-how that we use to make quality games.

Wired.com: With Mario 3D Land, which I played the whole thing, we finally saw with Nintendo 3DS a game where I never wanted to turn the 3-D off, I always wanted to keep going in 3-D. And I saw elements in that game that played with 3-D. But to look at every other game on 3DS, where Mario is head and shoulders ahead of them, what do you do for other people who are developing for 3DS? Are you outreaching, trying to get them to do what you guys did with Mario?

Miyamoto: Well, when it comes to Super Mario 3D Land, yes, that’s something that we really wanted to do by taking advantage of the capabilities of Nintendo 3DS. However, even though we were able to make something like that, we have no intention to force others to make a similar thing at all. Rather, I believe that I want every single developer to come up with their own ideas in order to take advantage of the capabilities of the Nintendo 3DS.

And for the players as well, I hope they will be able to play just as they like. Sometimes they want to play with full 3-D and sometimes not. Taking for example Mario Kart 7, sometimes they may want to simply ease the 3-D effect and actually [steer by moving] the 3DS unit. That’s actually very fun. But at the same time, sometimes … they just might want to appreciate the 3-D effect of Mario Kart. So it actually depends upon the good balance between 3-D and not 3-D.

When it comes to other companies and other developers, all I can say is, it’s good if they are going to study the way … they can take a perfect balance. Once again, we don’t have any intention to force or even educate them to do something like Mario Kart or Super Mario 3D Land, at all. For the game players as well, I hope that they can just leisurely and casually enjoy playing with Nintendo 3DS at their will.

Miyamoto: When it comes to the real attraction of Nintendo 3DS, of course, first and foremost, people can point out [that] it’s the 3-D. And of course I really wanted to make something which can surprise people. You know, be it Super Mario 3D Land or any other thing in the entertainment business, what we’ve really got to do is find out the new, fun elements. And with that, we try to surprise people. For Nintendo 3DS, and for Super Mario 3D Land, we wanted to convey the charm and attraction of something 3-D, some things which are popping up.

And what I’ve been doing in terms of developing or advising the making of Super Mario 3D Land, I think that hasn’t been largely changed ever since I started working on Donkey Kong many years ago. At first, of course, I need to know the … technological background of what can be done, what can’t be done, etc., etc. But at the same time, I never forget the viewpoint of the player. So sometimes I’m the developer, or engineer with the know-how and the knowledge of the technology. And sometimes I’m developing the game from the perspective of the game players. So I’ve never shifted my attention from that, anything at all like that. So what I’ve been trying to say to the other developers as well is just the same: Be … the developer who has technical background as well as the game players who are enjoying the videogame that you’re making.